At the invitation of Arondit

In the creative processes of the four artists presented, the notion of transformation, in the idea of passing from one form to another, allows the creation of displacements, new meanings, new abstractions.
With the concept of change, the Machine naturally occupies a central role because of its systematic and predictable aspect.

The MW 7200, a sort of giant microwave designed by Guillaume Gouerou (born in 1987), however, creates random stones that would not otherwise exist in nature. By melting mineral amalgams at high temperatures, the artist carries out experiments in which chance is the primary source of creativity. His photographs of stones obtained in this way under the microscope extend this idea of the unknown, highlighting the strange similarities between the infinitely large and the infinitely small.

By moving situations into completely different contexts, the forms and ideas that Florent Gilbert (1991) transposes allow for new, original and singular associations. Based on an anecdote experienced in the studio (a coffee pot often forgotten on the fire), the installation Pause Café evokes, in a completely different temporality – that of the exhibition – the idea of gushing out. By depositing these volcanic stones on the hotplate, objects and concepts are juxtaposed, creating a sensitive and intimate mental connection for the spectator.

The bars of The Painters deployed by Victor Vialles (born in 1986) were originally used as “home-made tools” by painters from a signage company. Spotted during an artistic residency and then bought directly from the workers, these “aluminium martyrs” are here moved, isolated and magnified. In a covering perspective dear to the artist, part of the space is covered with composite felt from recycled materials; like a case whose plastic specificities allow to accentuate the particularities of the place, while absorbing the ambient sounds.

Produced in collaboration with Lauren Tortil * (born in 1986) this covering also creates an obvious link with her video installation En libre suspens and maximizes the artist’s attention to sound phenomena. Moving from reality (visiting the site of an old satellite dish) to fiction (creating a new sound experience) Lauren Tortil continues her acoustic research in connection with architecture. By randomly creating sound frequencies in-situ during the making of her film, the artist offers us, via this new device, a displacement of this new experience.

*Lauren Tortil is laureate of the visual arts commission of the Cité Internationale des Arts. 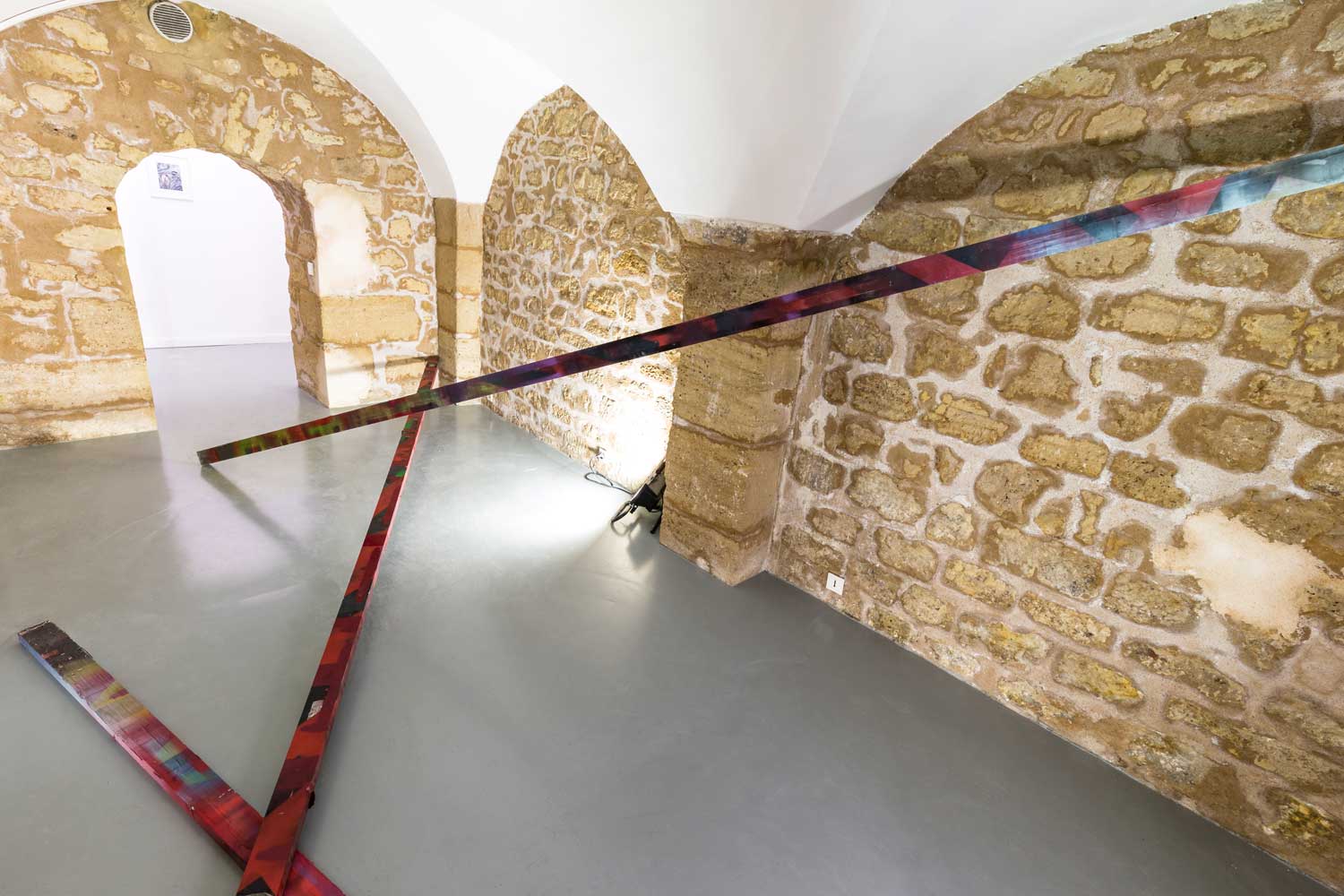 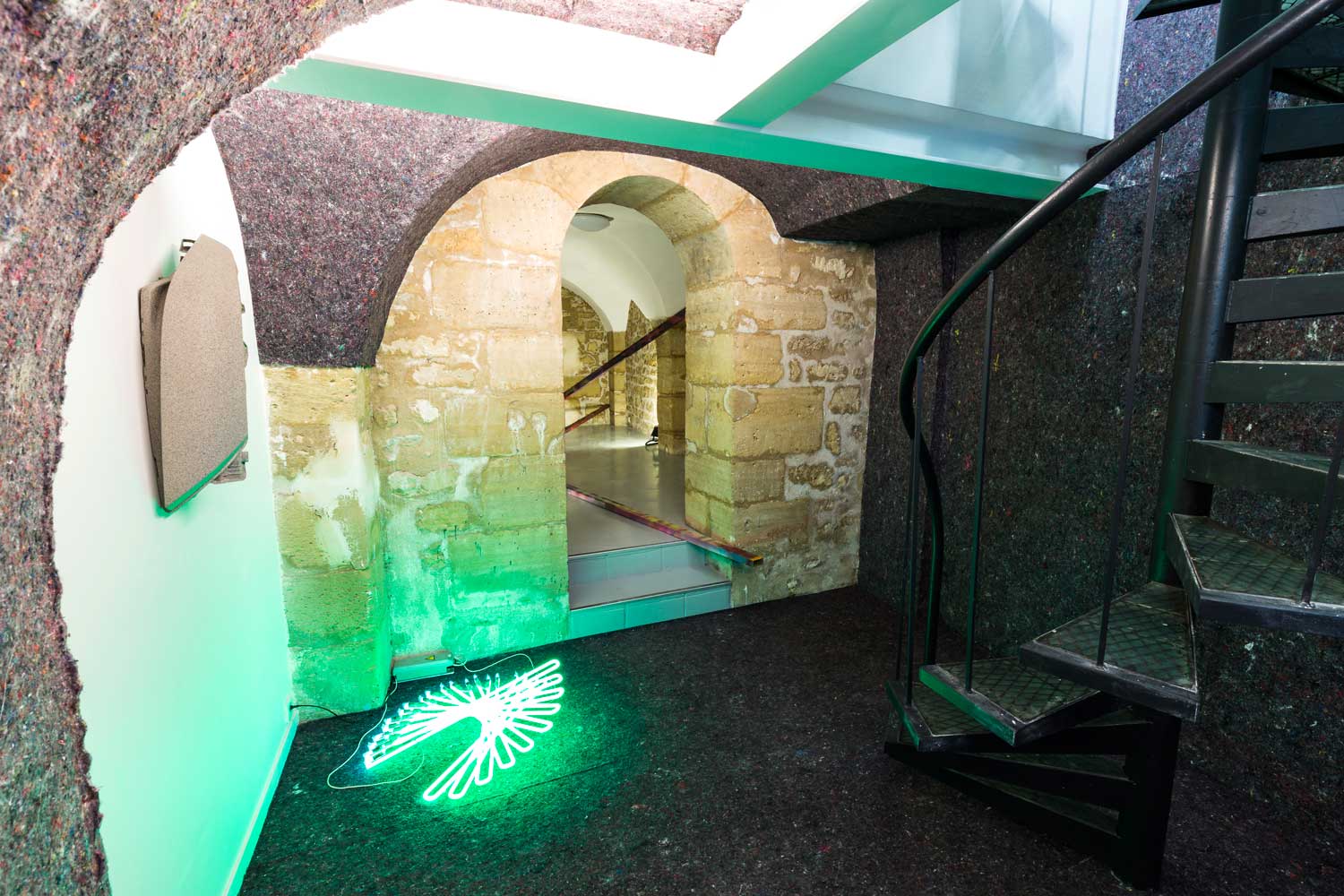 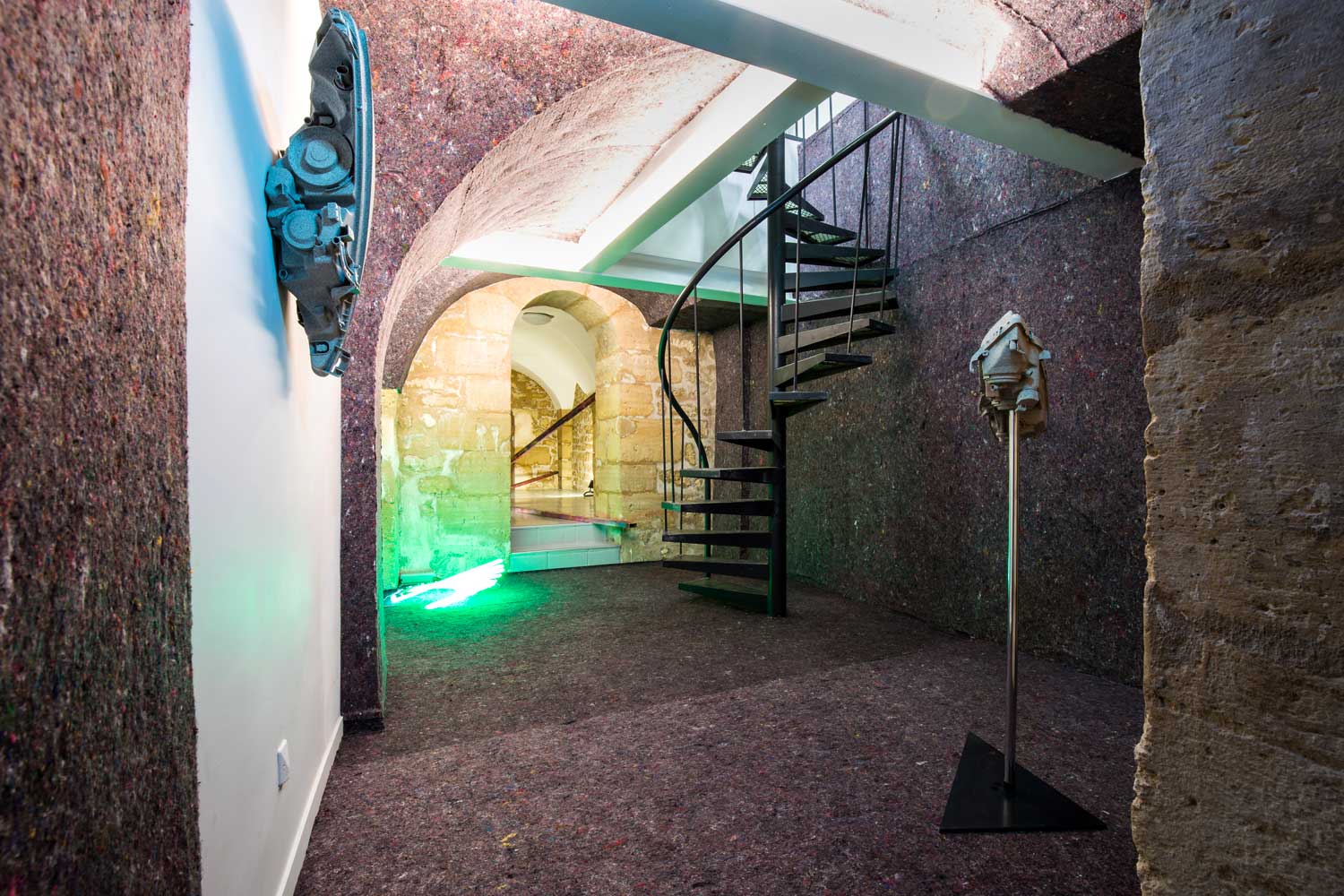 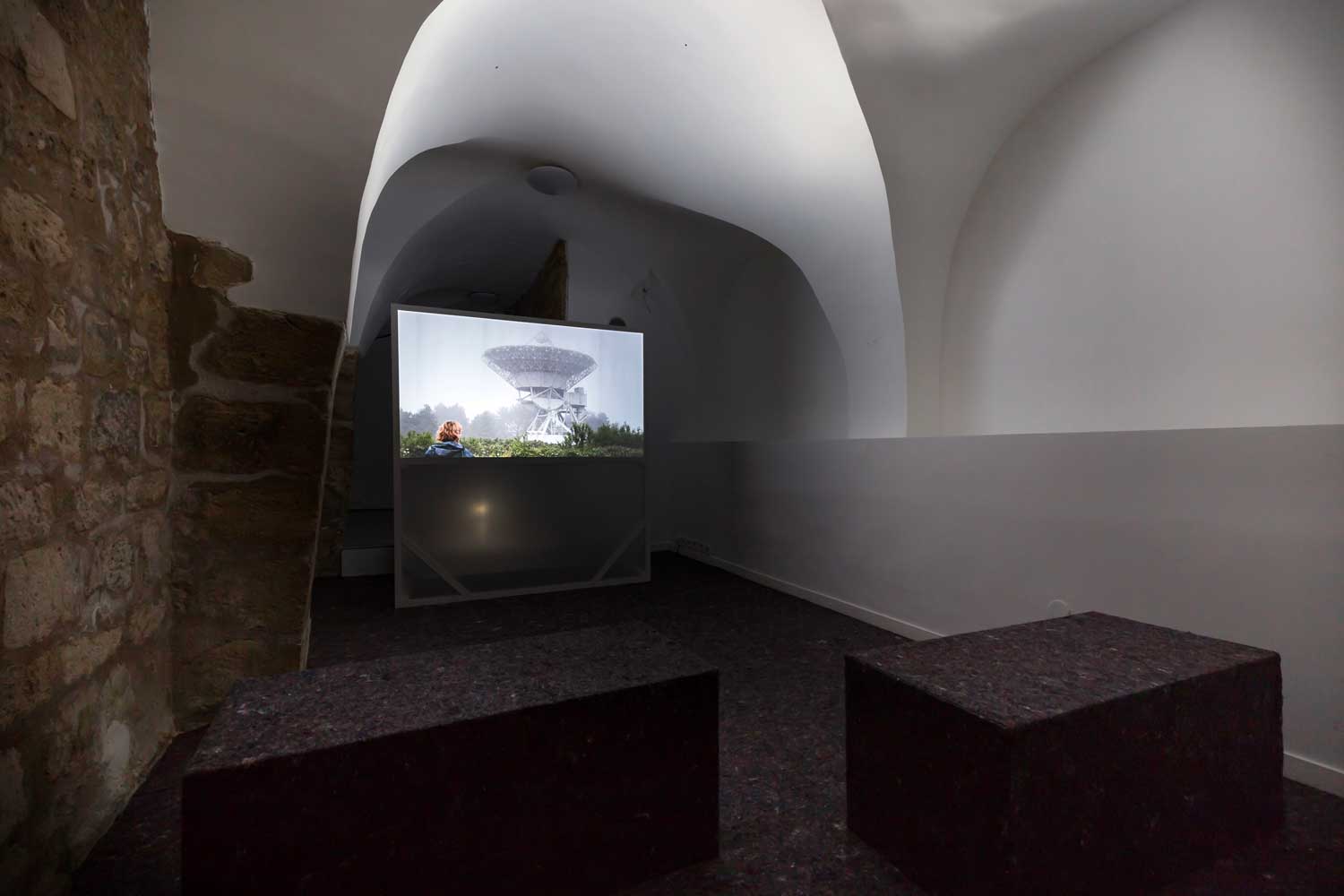 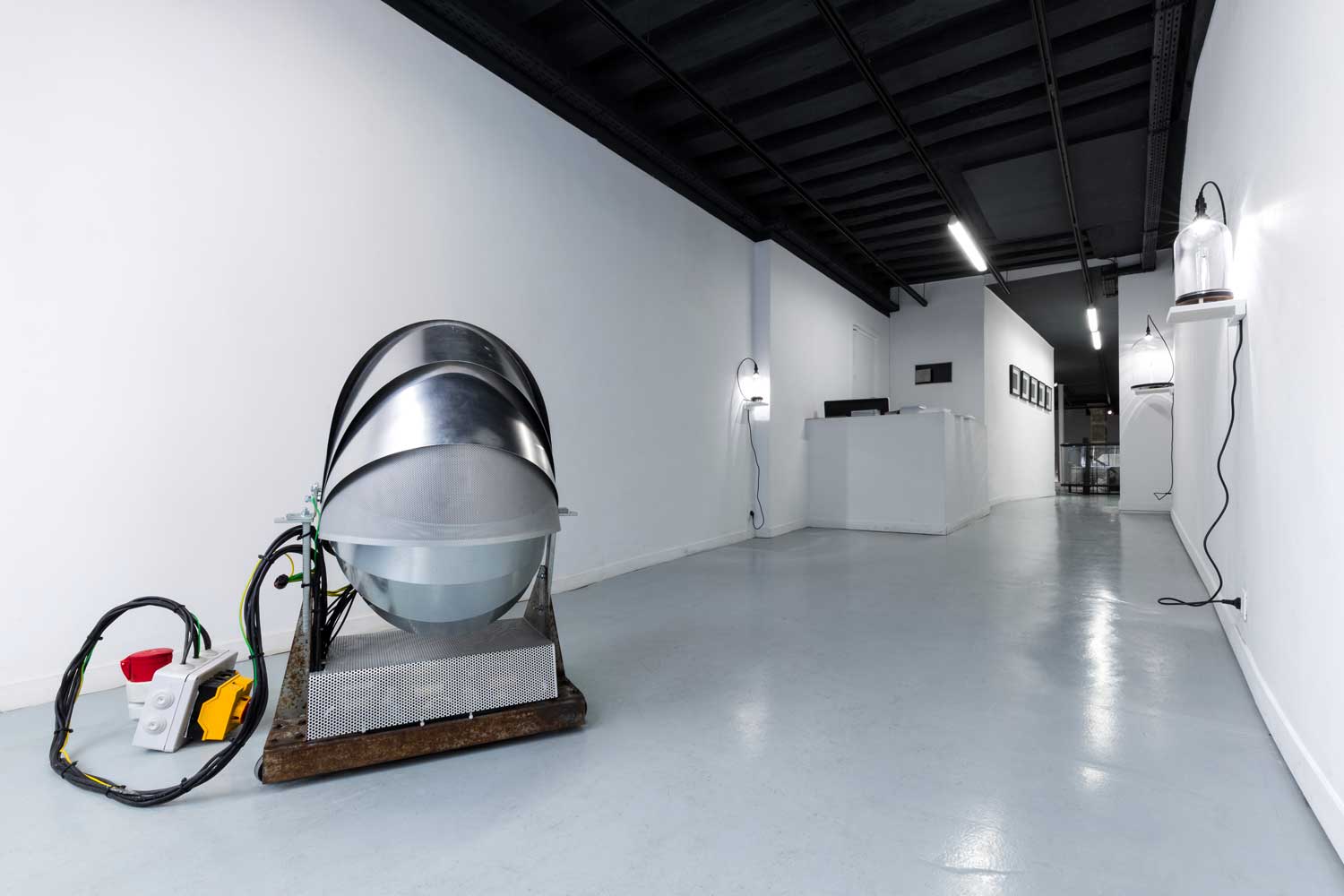 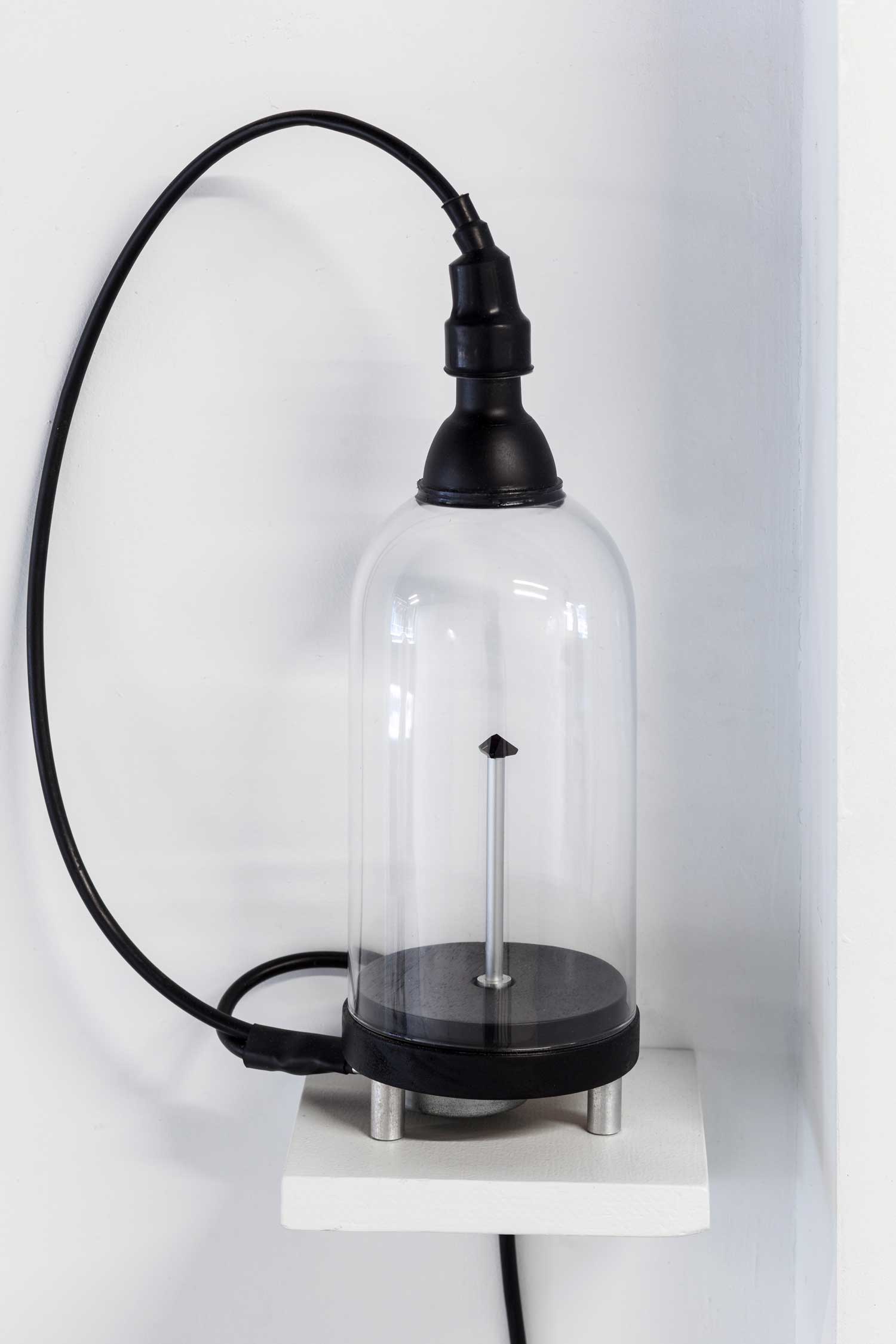 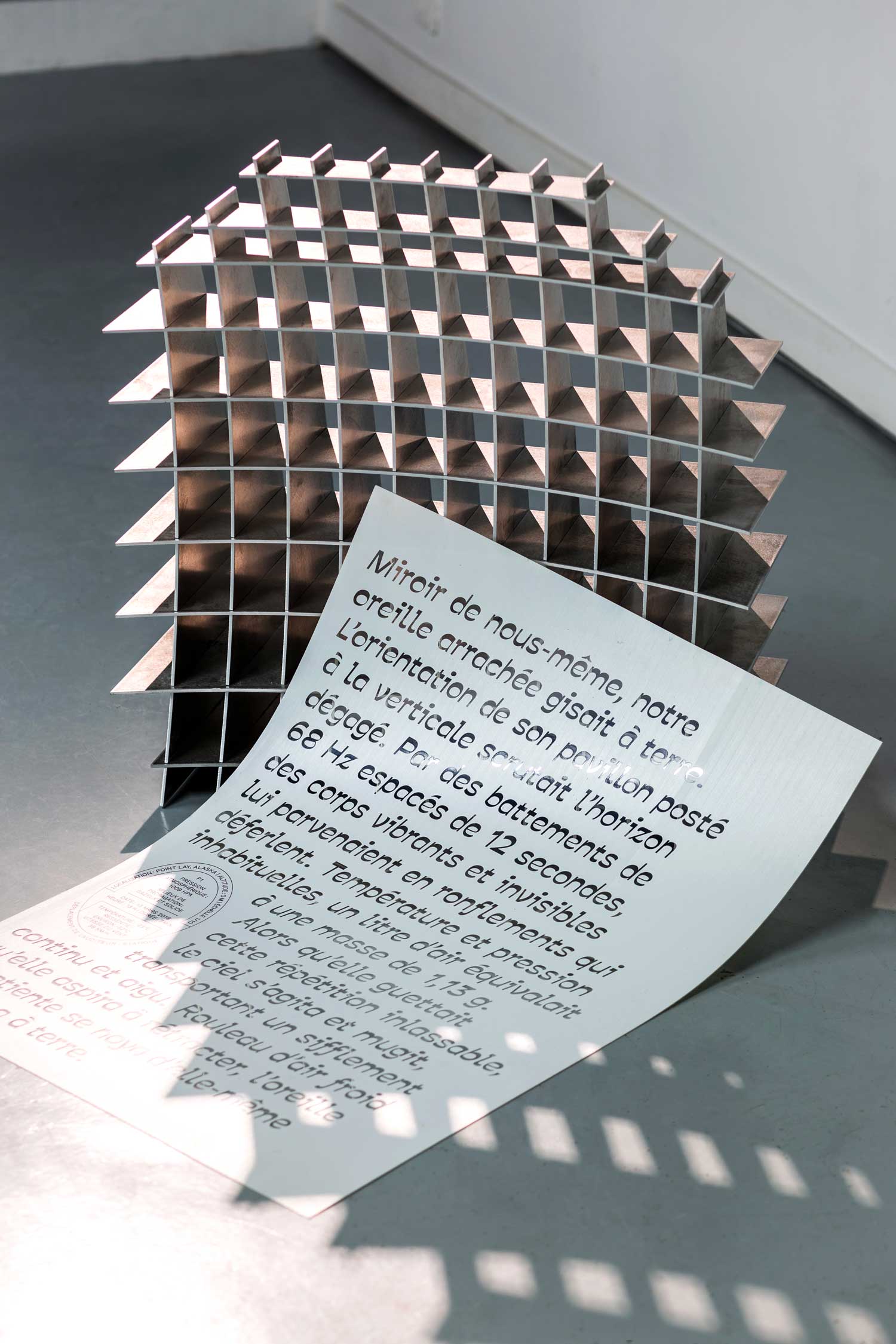 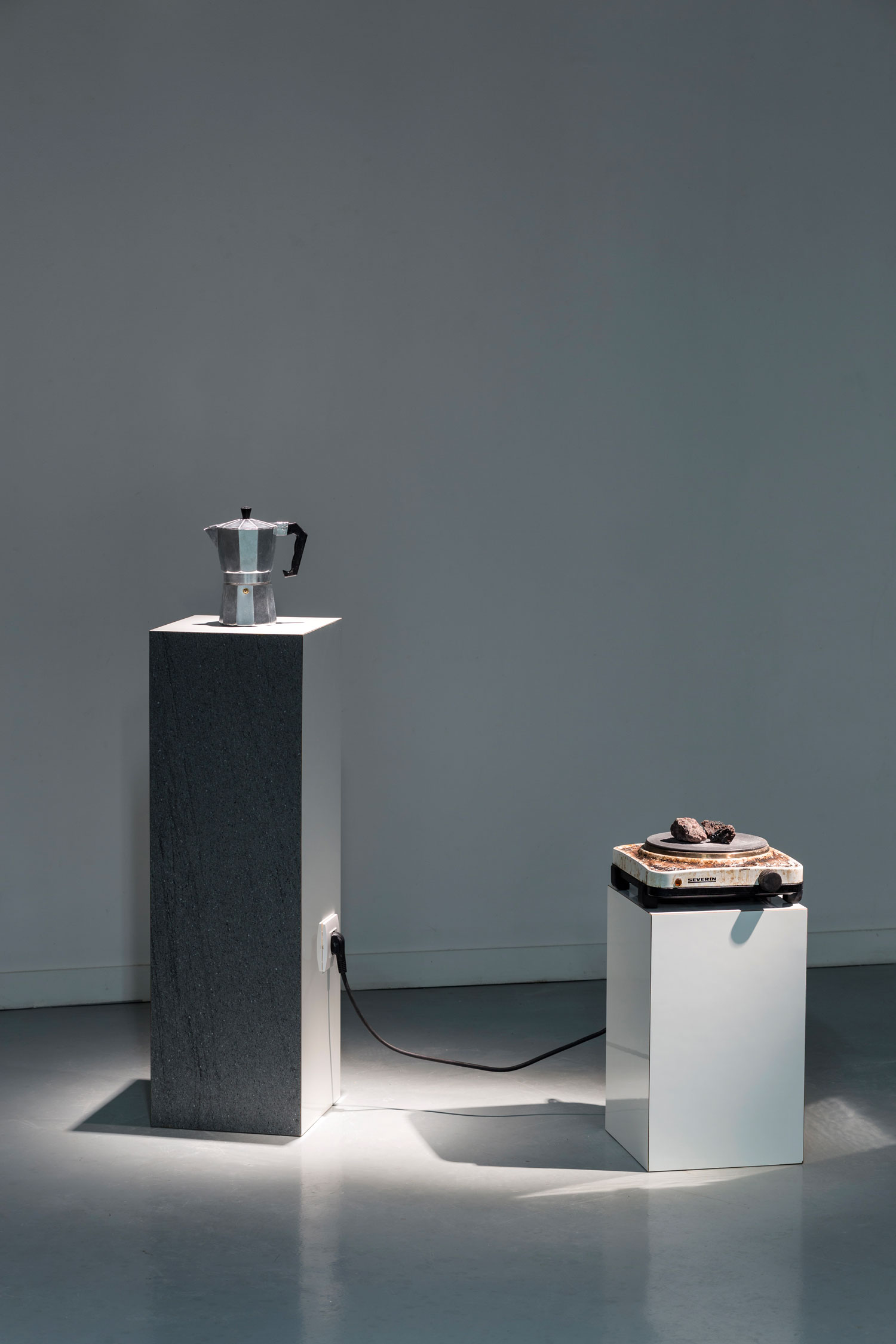 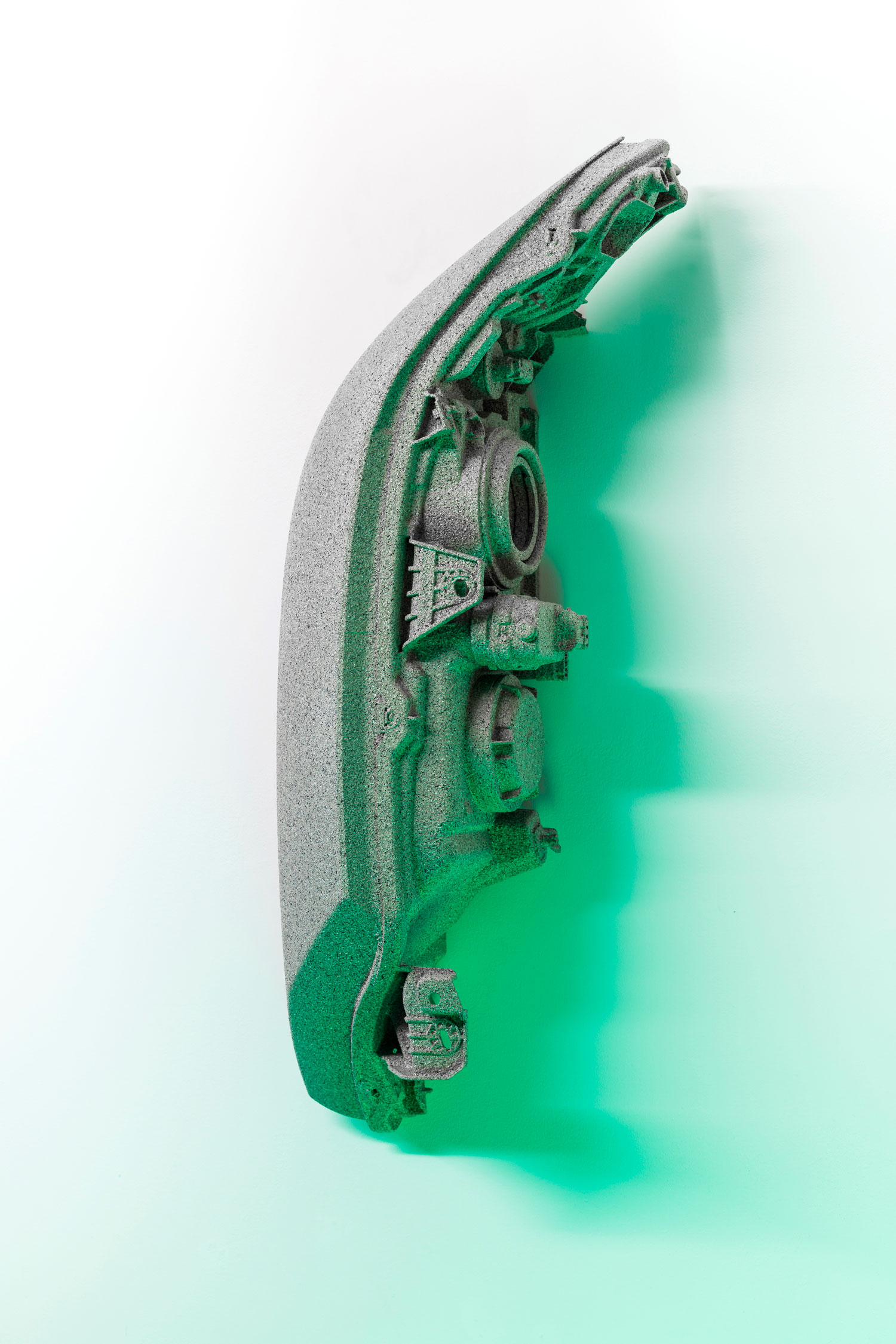 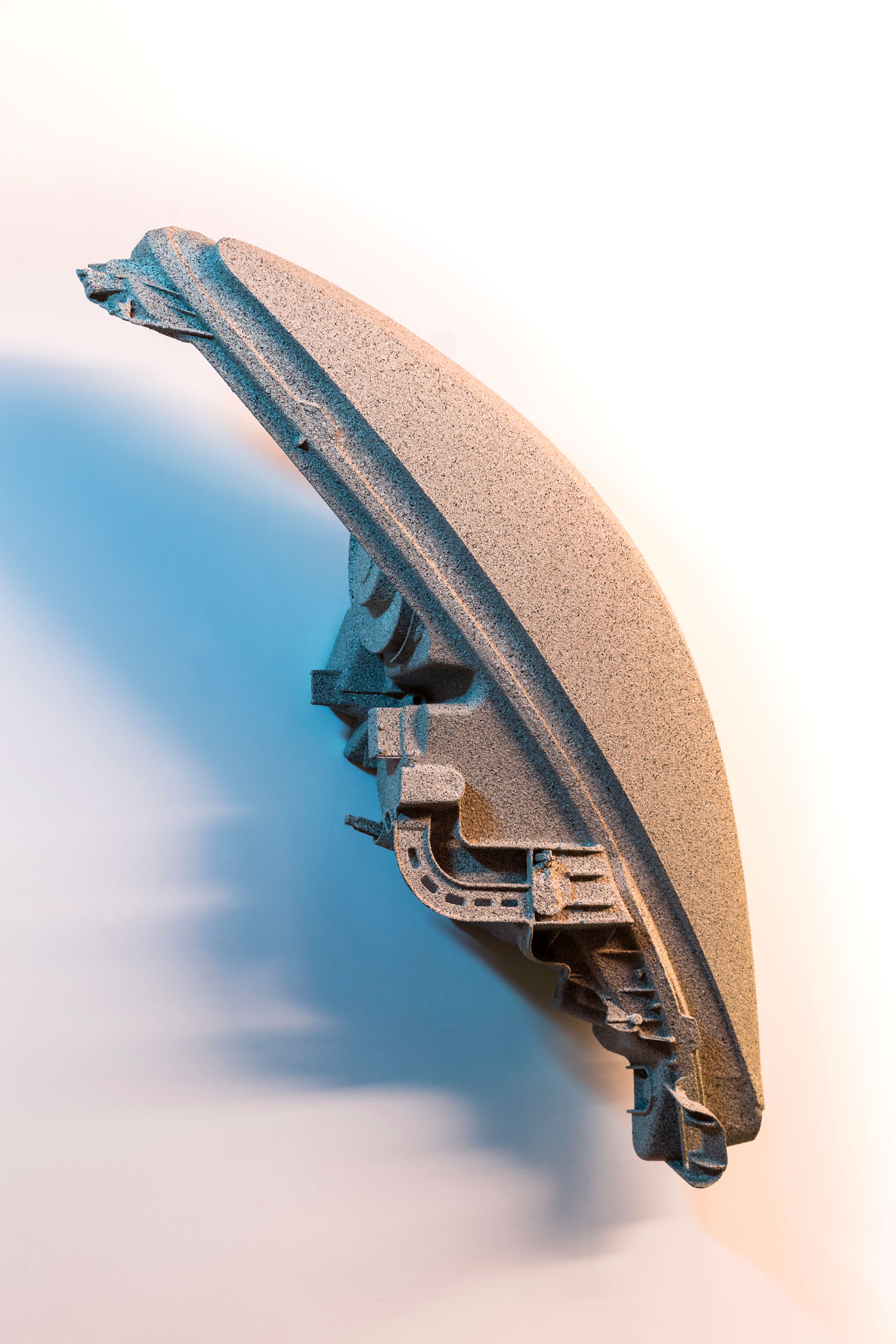 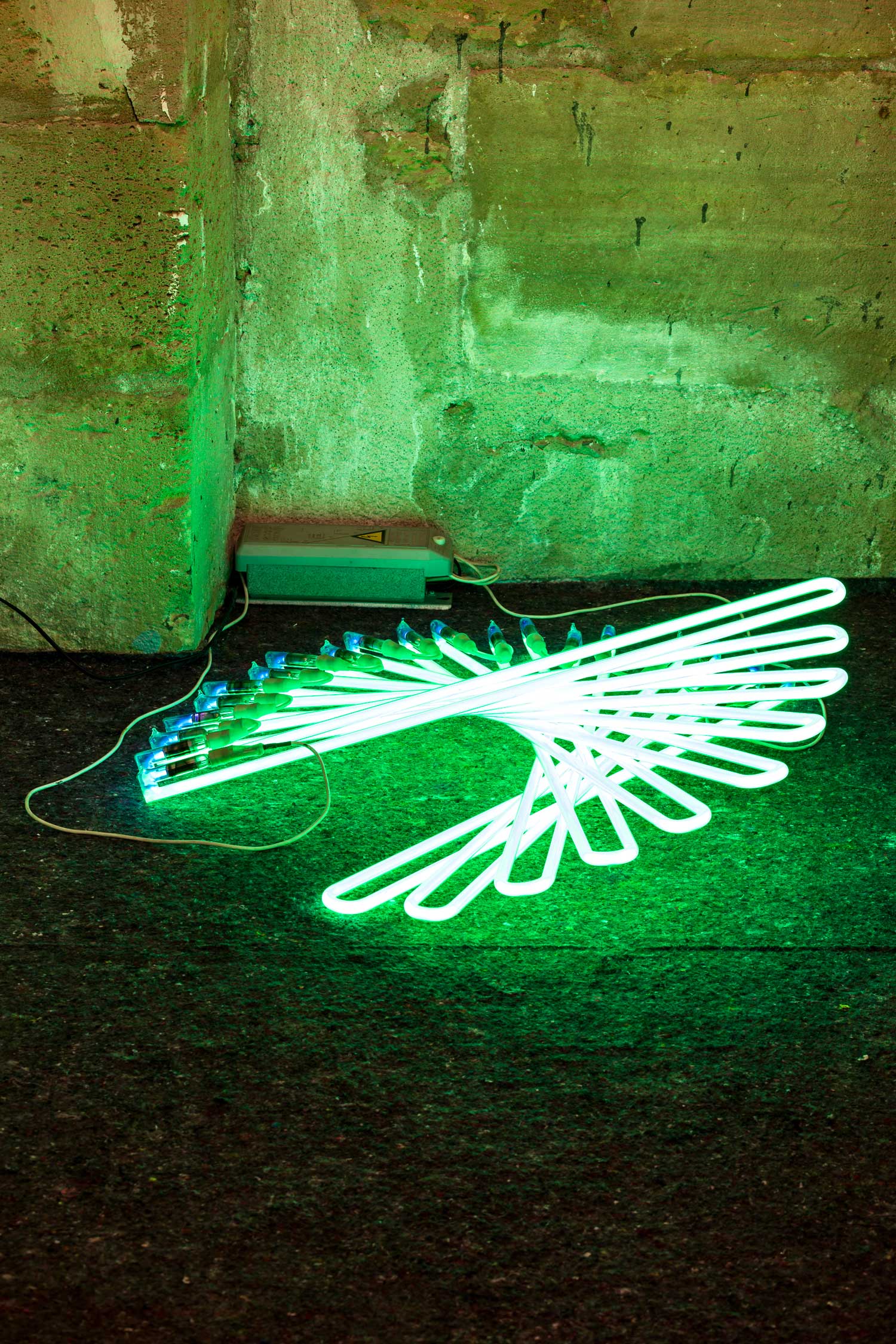