Some parts of Laura Gozlan’s films presented in the exhibition may offend the sensibilities of children.

This exhibition is part of Exporama.

Laura Gozlan’s work takes the form of installations composed of sculptures and videos. For her solo exhibition at 40mcube, she creates a sculptural environment in which is displayed a cycle of video micro-fictions.

Playing on screening or obscuring effects, the veils that compose the space modestly hide, then progressively reveal the works, inviting us to evolve in a slightly cold domestic environment, somewhere between a living room and a doctor’s office, which transpires a relationship to the body that is constantly diverted and evoked in all its dimensions, sensual, sexual, scientific, medical and religious. A black mask dripping with matter, both amusing and frightening, an artifact and an object charged with powers, reigns over the place and is discovered at the corner of the curtains. This physical displacement brings us to reconstitute a narrative that unfolds in the videos and sculptures.

The three films presented in this environment feature a unique character named MUM and played by the artist herself. This ambiguous being, close to a zombie, with expressionist make-up and outrageous acting, addresses us dressed in a classic suit, manipulating objects that seem to have been exhumed from beyond the grave, in a place that looks like a boudoir and a psychoanalysis office. This character constantly splits between a state of control and that of impulses that overwhelm him, exploring the way in which the body and the sexuality of women have been successively treated and demonized, through a series of representations, that of the archaic mother, the witch or the vampire. As evidenced by the title of the exhibition, which can be read either way in french, onanist witchcraft or witchy onanism, Laura Gozlan immediately assimilates these two practices, both equally taboo. In a ritual dimension related to sex magic, the orgasm of this character brings him into a state close to trance which gives him a power of self-reproduction, evoking the cloning experiments of post-humanism, and a power of self-realization, which one cannot help but associate with the creative act of the artist.

Setting up a strange and disturbing atmosphere, these films, with their elaborate dramaturgy, suggest a mise en abyme, a off-beat humor story that plays in a frontal way with genre codes – including artistic ones -, and symbols – especially sexual ones. Inspired at the same time by tutorials found on the Internet, Giallo – this Italian film genre that combines thriller, horror and eroticism -, anticipation films, scientific documents, the artist adds to these references a dose of humor and grotesque. The amplification of liquids or slimy materials sounds reinforces this effect, allowing to take a distance with the apparent seriousness of the images and the technological aspect of the LED screens on which they are displayed.

This hybrid creation, which is closer to performance or filmed theater than to cinema, extends into the exhibition space. Conceived as an extension of the films, the gallery contains, between the veils that recompose it, three organic sculptures that look like anatomical fragments augmented by prostheses in contorted positions evoking childbirth, pain, and pleasure. Aesthetically close to the objects manipulated by MUM in the films, they are revealed on the background of the set in which the videos were shot, presented on one of the walls.

Thus the exhibition Onanism Sorcery is made of back and forth between different elements: the works that compose it as well as the references that act off-screen. It immerses us in a troubled universe, a reflection of subjects that produce a powerful effect of attraction and repulsion on us. By playing with these contradictory impacts, Laura Gozlan proposes a complex, non-binary world, where strangeness and hybridity would be the norm.

Laura Gozlan is represented by Valeria Cetraro gallery (Paris).
Laura Gozlan benefits from the grant of the Cnap for an artistic project. 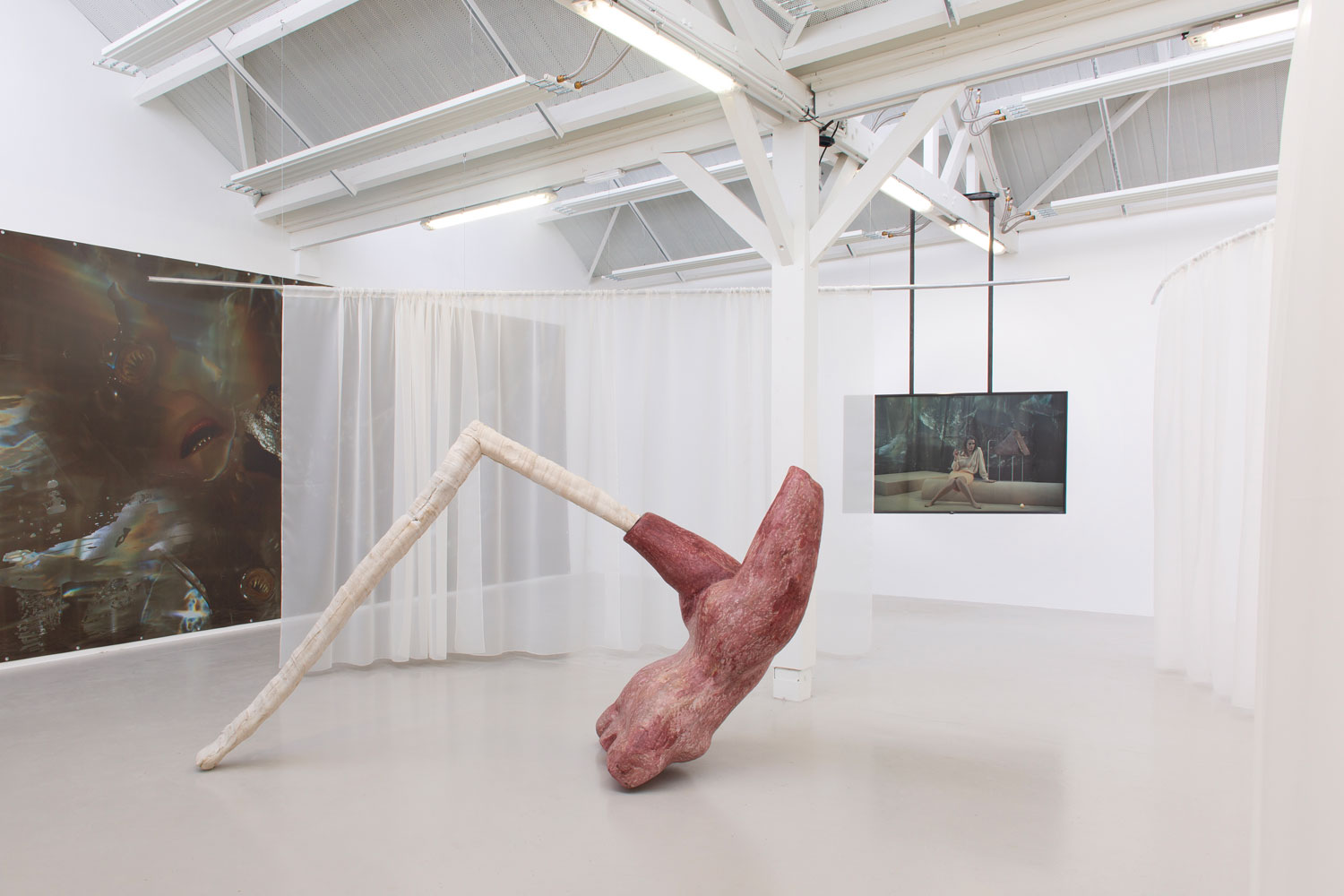 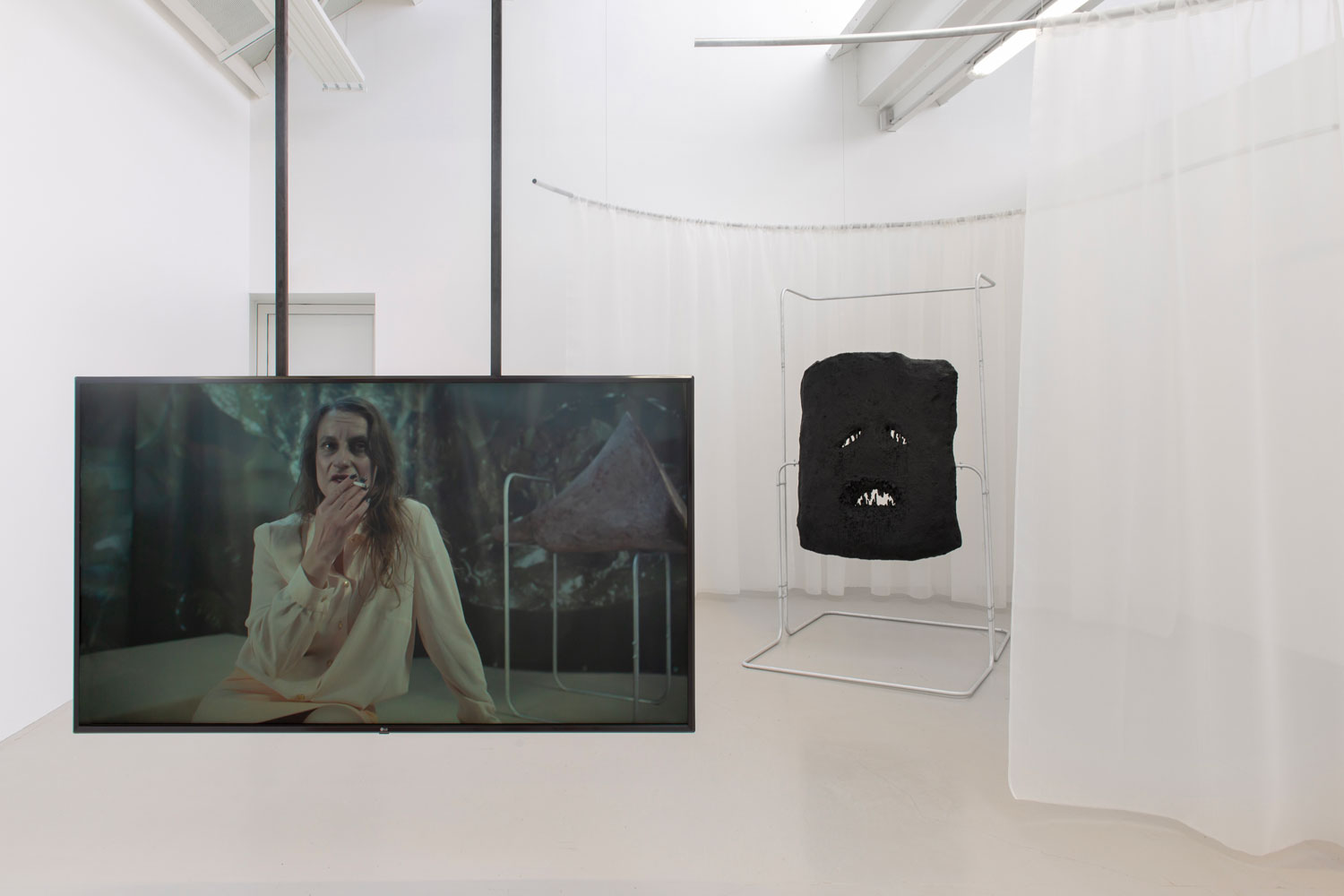 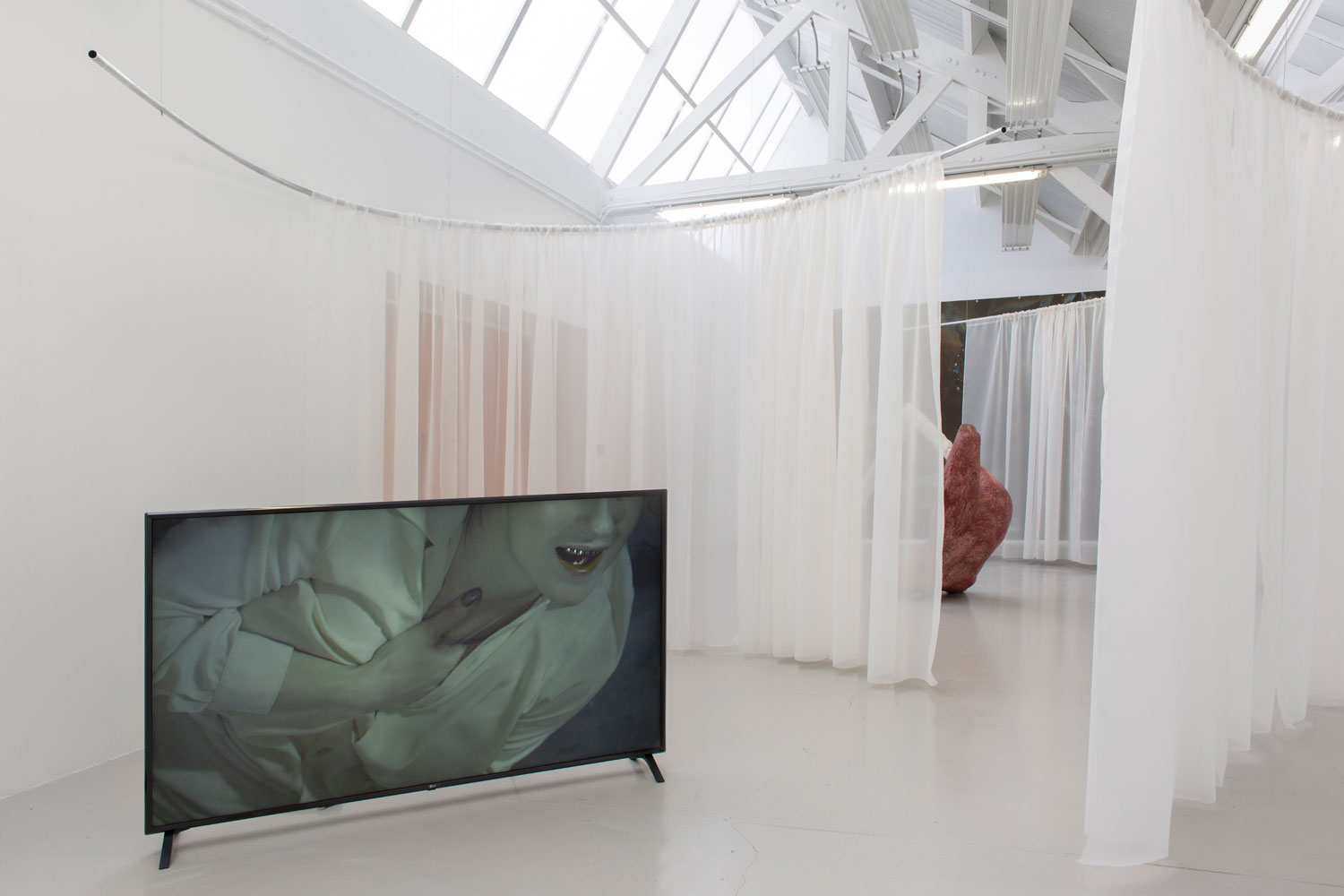 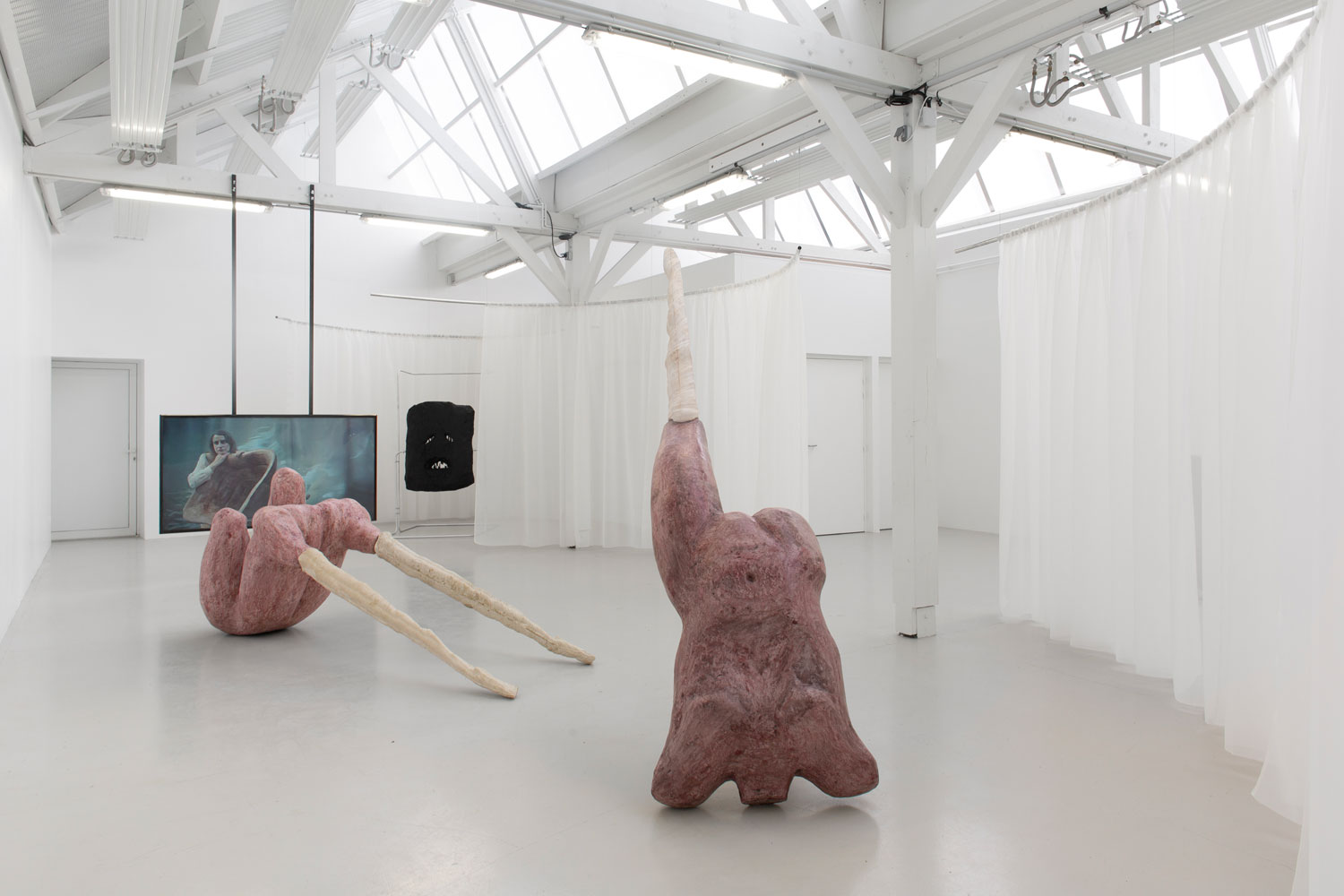 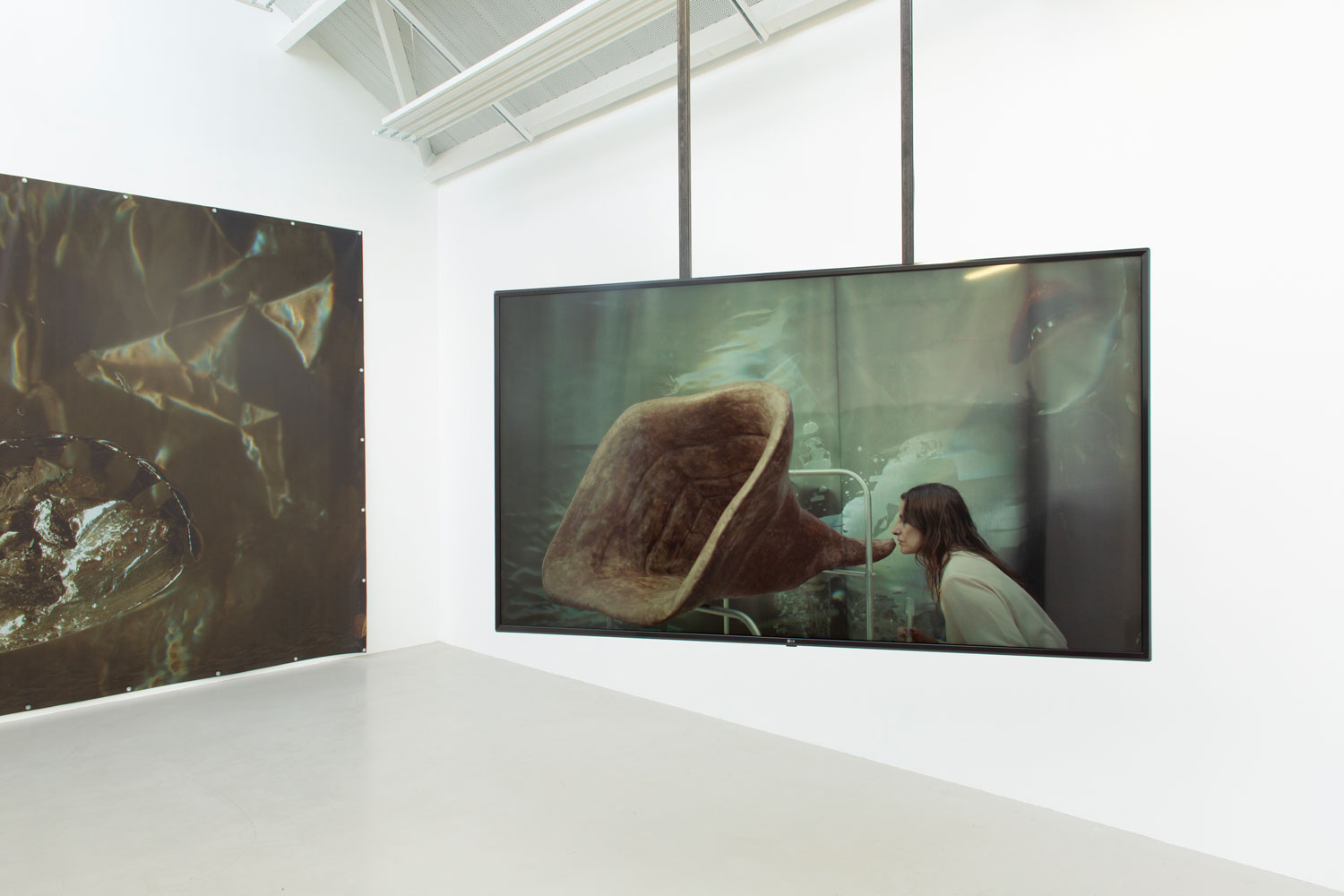 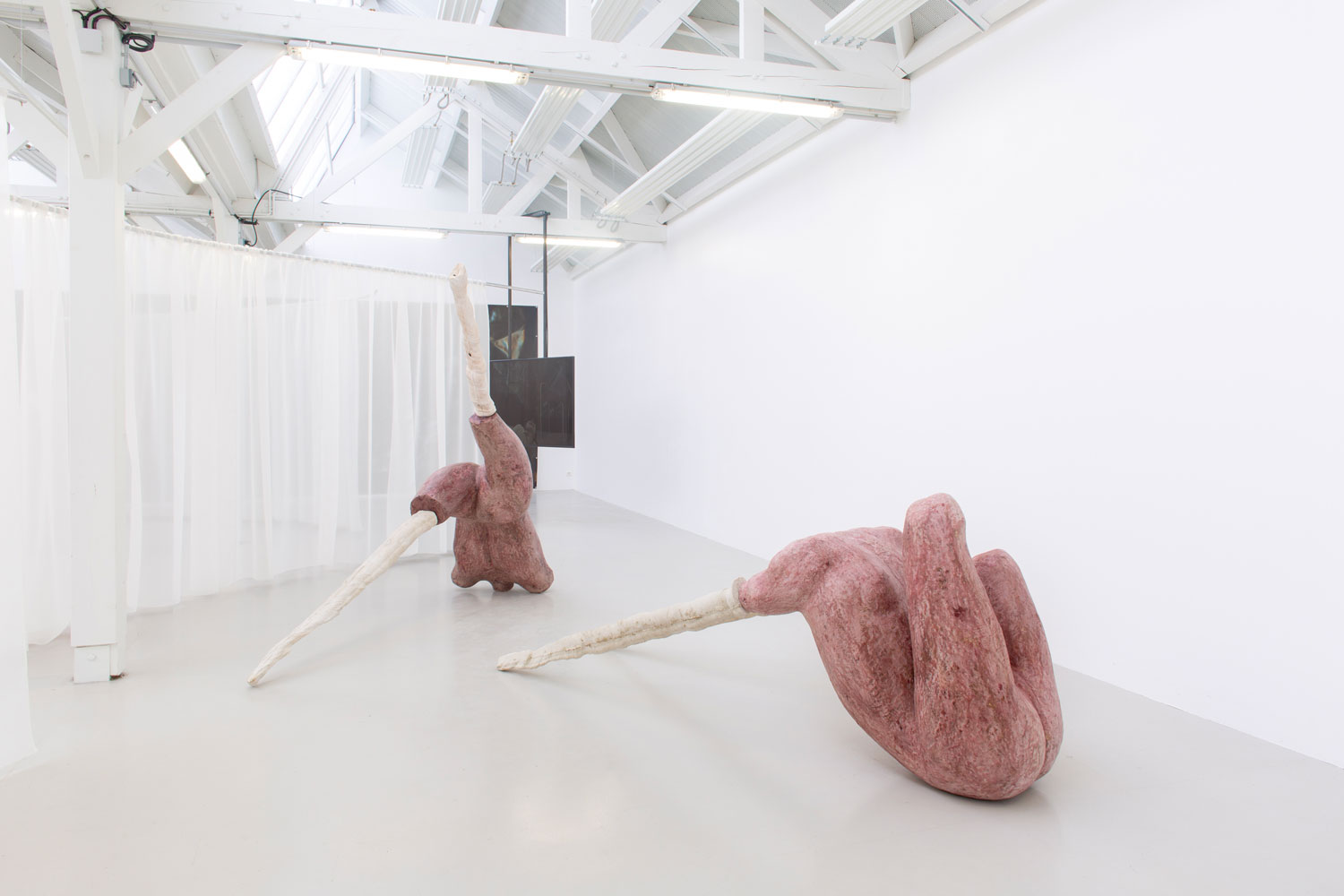 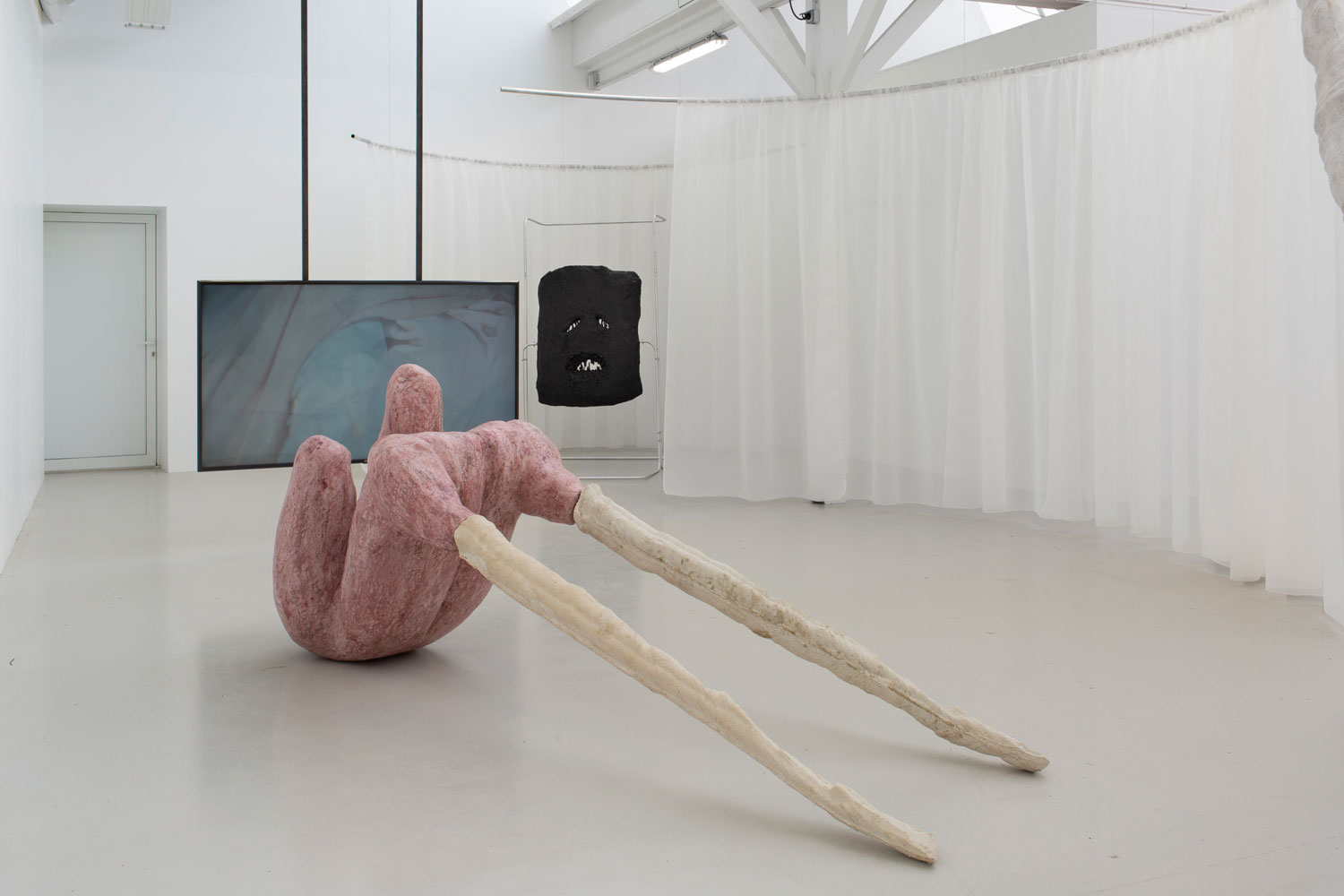 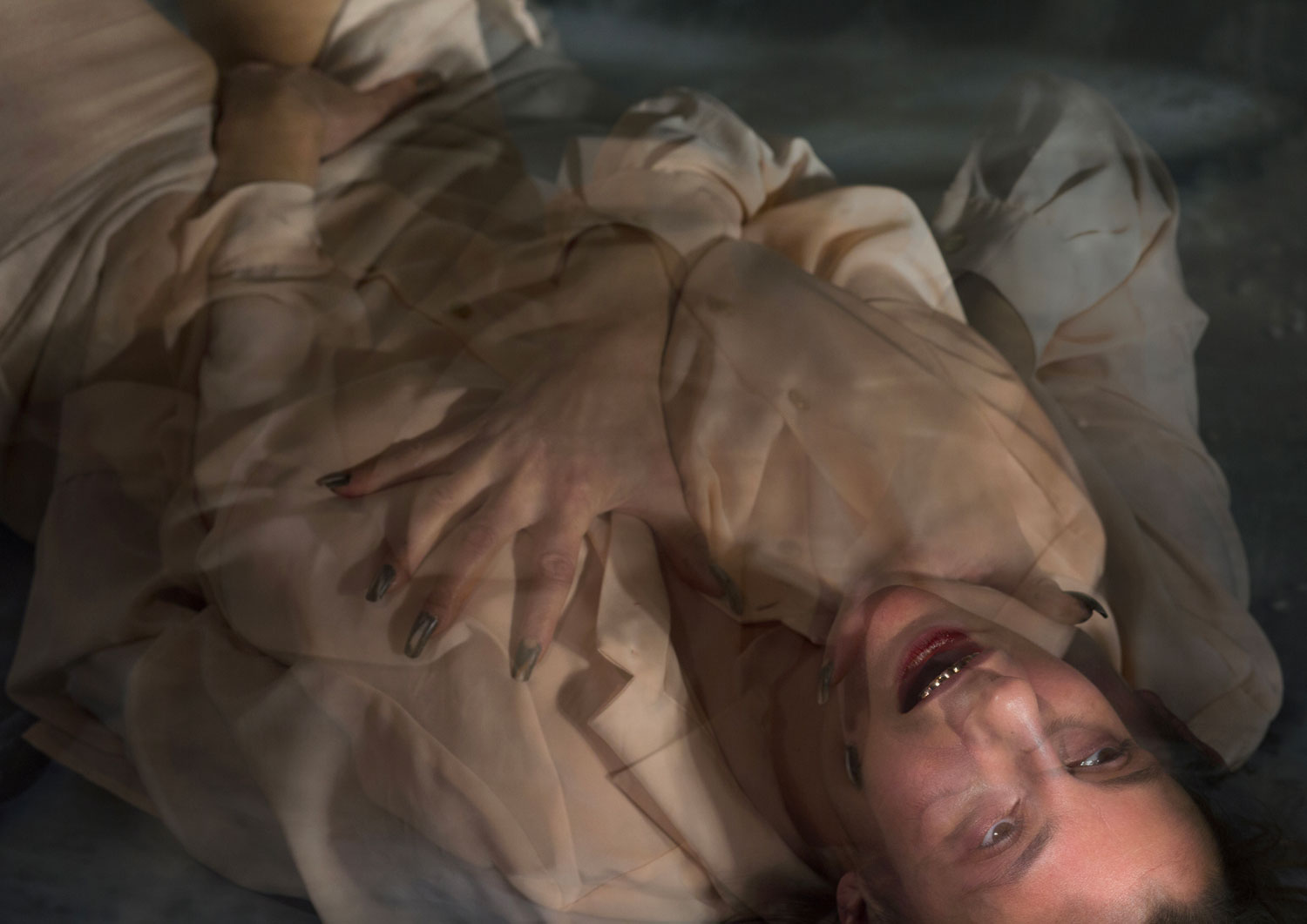