Vernaculaire is the generic name of Stéfanie Bourne’s artistic practice since 1999, a practice that takes place in varied and specific contexts outside art venues, making use of multiple means of dissemination and raising the question of the multiplicity of audiences. Chronique d’une œuvre annoncée is the exploration and the exposure of the process of diffusion of a work whose material production is not the priority mode of existence, in order to envisage alternatives to the exhibition, and to make this artistic practice more visible.

Arborescence
This silkscreen is co-published by 40mcube and Castel Coucou as part of Chronique d’une œuvre annoncée. It includes on the front a text presenting the project, and on the back a diagram making visible the temporal and geographical process of the work, as well as the network created for its realization. This diagram is printed with thermal ink: it appears if the temperature is below 5°C.

Vernaculaire is the generic name of Stéfanie Bourne’s artistic practice since 1999. Her work takes place in various territories and contexts, through immersion with groups of people. On the occasion of a carte blanche offered by Castel Coucou à 40mcube, Stéfanie Bourne carried out a residency in Forbach in April and May 2004 where she initiated a reflection on the visibility of her work and a search for new forms. From this reflection was born Chronique d’une œuvre annoncée, a project that unfolds in several stages.

After a month residency at Castel Coucou in Lorraine, Stefanie Bourne has selected as audience a territory and a population specific to this region: the trans-borderers. The Lorraine, Luxembourg and Sarre constitute a non-official territory but that constitute a considerable numbers of informal exchanges of person and goods. This trans-border situation has consequently created a cultural area, and even a language, mixing French and German, which isn’t recorded but largely spoken.

Stefanie will be working with three of these persons who live in France and work in Luxembourg or in Sarre (Germany). As customary, she will be creating next October, an event which nature isn’t yet defined. This part of the work will only be visible by the persons concerned and the ‘Colporteurs’ (three persons), attending as witnesses.

Written Chronicle is an analytical account of the Chronicle of an Announced Work, accompanied by a retranscription of the stories of the Colporteurs. (Forthcoming edition)

Co-production : 40mcube, Castel coucou. With the support of the AFAA, the Ministry of Culture and Communication – DRAC Brittany, DRAC Lorraine, the Regional Council of Lorraine, the General Councils of Ille-et-Vilaine and Moselle, the cities of Rennes and Forbach.

The workshop Talked Chronicle is a fragment of a larger project, Chronicle of an announced artwork, collaboration between an artiste, Stefanie Bourne, and a curator, Anne Langlois, and several exhibitions spaces.

Stefanie Bourne’s practice, Vernacular, takes place and is formed by the social realm, with selected and limited group of people. Chronicle of an announced artwork is an enquiry on means of making such work visible in the art world.

Day one: The content of the workshop, Talked Chronicle, adopted the oral form of Stefanie’s practice. Not always reflecting the process that she implements, Stefanie’s work has often suffered from the images taken out of the discursive process, as they not always represent the process but its impact or tools used. The idea of this workshop was to explore the process of narration that takes places in each project. Thus Anne Langlois narrates about 40mcube programme, focusing on immaterial or event based projects developed by 40mcube and necessitate a visible form in order to exist in the art domain: Abraham Poincheval and Laurent Tixador, L’inconnu des grands horizons; Nicolas Boone, Révélation; Lara Almarcegui, Les démolitions de Rennes; Stalker, Microtransformations urbaines. Followed by Stefanie Bourne recounting her practice course, her work and her method, now named Vernacular.

Following theses two oral presentations, Chronicle of an announced artwork is then presented and the collaboration that it installed.

Day two: Students took their turn and were solicited to present their work without showing visuals, texts, or three-dimensional works. This narration could take different directions. It addressed the genesis of their work, to provoke descriptive skills – visual, smell, sensitive, sound -, to use the comparison, the reference in order for the audience to create an image for themselves. The workshop then tackled questions such as destination and reception of artworks, even when this issue was approached from a theoretical angle.

As we estimated that we were at the school for a too short time to give valued judgements on the students’ works, our intention was to displace slightly the order of things, to create a moment between professionals and students, an act benefiting as much ourselves as the students. We preferred worked in a collective way, on an exchange mode between Stefanie’s work and the student’s by creating echoes, links and comparisons. This collective exchange allows the students to speak about their respective work and the one of other students – known or not – and to develop another layer of interpretation, of expression, of views points, demonstrating that art is also about this. The feedbacks were very rewarding. Although students found it initially hard finding the words and describing their work to someone alien to their work development (not having it in front of them), the process opened for them a different perspective in looking at their own production.

Thanks to Jean-Jacques Dumont.

Enquiries on means of dissemination of Vernacular, A discursive visual art practice raised from a creative process installed in the social realm

From the context….
Chronique d’une œuvre annoncée is a work searching for modelling an appropriate dissemination form for a non-object based practice and therefore an adequate relationship between an artistic and an exhibition curator, between an artist and an artistic infrastructure. The enquiry is raised, from Stefanie Bourne’s practice, Vernacular, and intend to invest and compose with the pre-established art system (curator, residency, exhibition, dissemination…). It consists of redefining the relationship between artist/curator of an exhibition, artist/exhibition space, curator/exhibition space in a collaboration on an artwork over a long period of time, without reproducing the known relationship artist/gallery.

This mutual interest in each other’s role takes form in Chronique d’une œuvre annoncée. The work started in an Internet correspondence, and was concretised with a residency at Castel Coucou (Forbach). The concept of residency became a virtual place, a context of mutual work for a creative relationship between a curator and an artist. The discussion is still evolving on the Internet by return and exchange of developing idea on the issue.

….to the dissemination
The artwork in the social realm is a mode of dissemination on its own, as it needs to communicate clearly its ‘raison d’être’ in a non-artistic context. Its re-localisation in an exhibition space becomes a second diffusion of this initial project. Vernacular originally only consisted of the experience in the social realm in a form of existence that did not systematically address an art audience. Chronique d’une œuvre annoncée is an attempt to integrate the means of dissemination of the art world into its discursive creative process, and to create an aesthetic coherence between the two visibilities of the artwork.

The issue of disseminating a social context-based work is raised through the de-localisation of the dialogue between the curator and the artist into the residency at Forbach; and it is also raised with Stefanie’s practice in her method of infiltration of selected groups of people. This situation lead Chronique d’une œuvre annoncée to think its mode of visibility in term of simultaneity with is creative process, in term of time and geographical (How can an oral artwork be visible both in France borders with Germany and in a Scottish context?)

… via the interpretation of both the context and it dissemination by the artwork.
Thus Chronique d’une œuvre annoncée is constituted of several phases in different institutions and contexts that successively applied the on-going written exchange taking place between artist and curator: the art school in Metz ( Talked Chronicle, May 2004), the gallery Castel Coucou in Forbach ( Private Chronicle, October 2004 and the performances by the ‘Colporteurs’: Translated Chronicle one, February 2005), an art institution in Glasgow (performance by the Colporteurs’: Translated Chronicle two, Mid 2005) and with 40mcube in Rennes ( Written Chronicle by Anne Langlois).

Chronique d’une œuvre annoncée will be first implemented in a social context in an event and based on a language evolved by a population living in frontier between France, Germany and Luxembourg, working and living across countries ( Private Chronicle, October 2004). This event will concern a small amount of people but will be witnessed by ‘Colporteurs’. The word of mouth and narration, that naturally takes place as a mean of dissemination in Stefanie’s projects, will be articulated and formalised by the ‘Colporteurs’. Integrated into the creative process and orchestrated by the artist, their role will be about sustaining the artwork in time and providing it with a life in the art system.

Production in France, Germany and Luxembourg-2004/2005

The ‘Colporteurs’ are the searched outcome of this collaboration. Stefanie Bourne implementing her work with a reduced audience, Chronicle of an announced artwork was born from this will to find out a form that would replace the work into the art world. Narration is the only materiality that Stefanie wishes to build around Vernacular. It can be repeated infinite, even with subjective alteration each time the story is being told. Following the residency in Forbach, the idea of disseminating the process of a discursive artwork will be experimented through a mission given to ‘Colporteurs’. They are actors or persons having inclination to narration. Some will be invited to assist at the start of the process, and others to the event only, part of the overall and non-finite process of Chronicle of an announced artwork. Their observations of the discursive event will allow them to account for it in exhibition spaces and other cultural locations. This tale has to be a narration or a text. They will provide an alternative artistic form to the classic phenomenon of the narration of a seen event, a formed word of mouth, allowing for the context based artwork to integrated the art context. It also includes a part of interpretation and deformation due to the subjective transmission.

Stefanie selects the ‘Colporteurs’ in term of their own artistic or professional work, their personality in regard to narration and relationship with contemporary artistic oral form. Their professional activity varies but are all engaged in a narrative process. Stefanie doesn’t influence the ‘Colporteur’ in his/her interpretation of the experience they experiment but still orchestrates the overall presentation in which they will present their narration. In February 2005, the ‘Colporteurs’ will be performing their work and interpretation of Private Chronicle in three spaces of sociability in Metz, in Luxembourg and Sarre.

The question of the context based practice and the vernacular nature of its treated subject remain. Can the particularity of a region be displaced into another ? Can Translated Chronicle be translated in finite and others ‘Colporteurs’ added to the multi language performance and have an impact into a non-concerned context ? This addition in the form (the translation) still adds another layer in its content and in the interpretation to this project, definitely very linguistic. 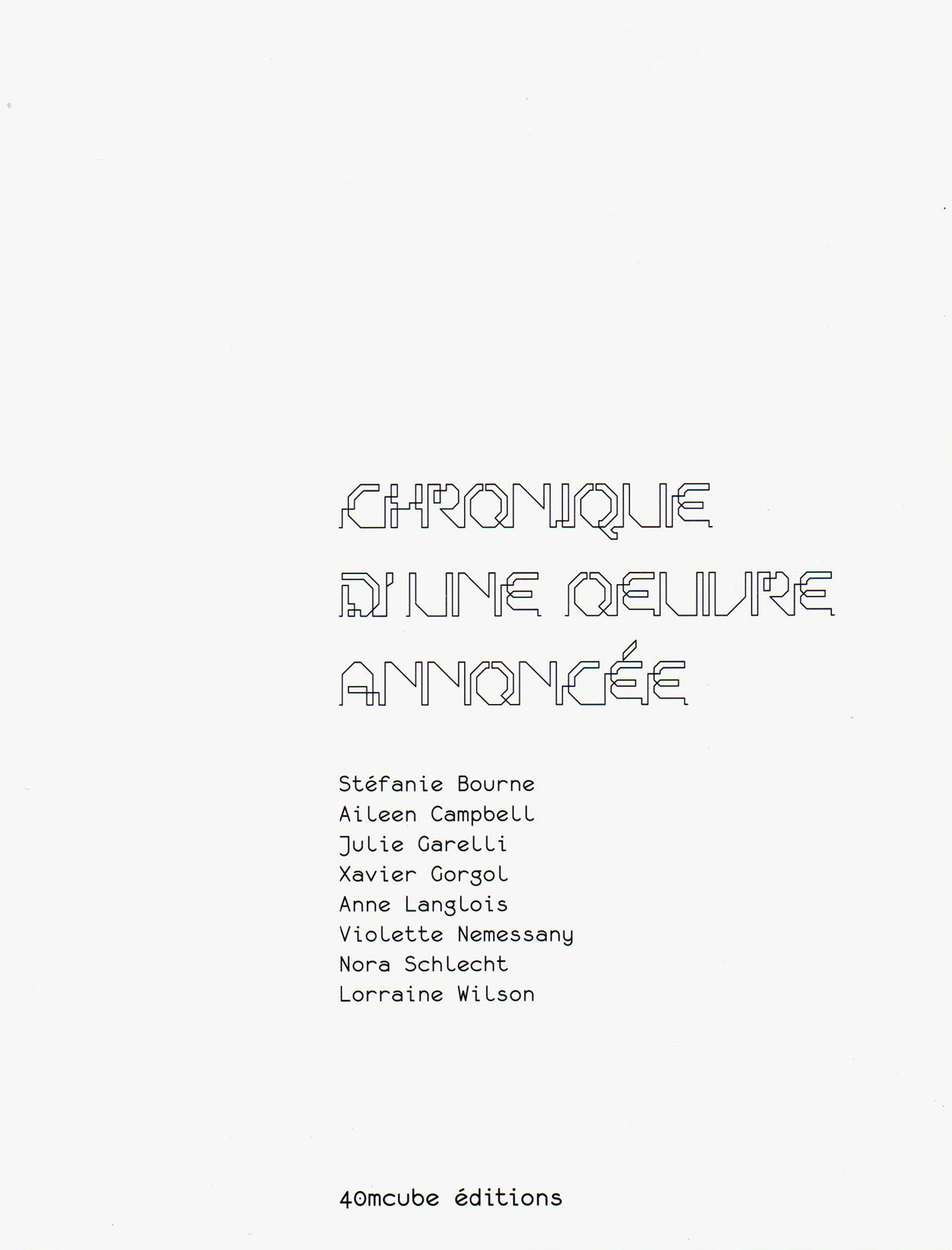