For the second consecutive year, Arondit welcomes the new promotion of the GENERATOR program dedicated to the professionalization of young artists, carried by 40mcube in Rennes. We are once again very pleased to present this end-of-training exhibition and to accompany the four artists who have been given carte blanche for this project specifically designed for our space and produced by 40mcube.

Cellar Door presents itself as a fictional immersion in a domestic space, that of a house inhabited on two levels and arranged by the inner states of the people who live there. In the continuity of their first PostPop project presented last March at the Art & Essai gallery (Rennes), Cellar Door is a continuation of the same intentions of fiction, narration and staging. Thus the ground floor of Arondit brings together works in decorative and utilitarian tones while the basement presents a descent into the unconscious. As in a habitat where living spaces are partitioned, the universes of each artist are clearly identified here.

The sign A casa mia could easily be transformed into A casa tua as Aude Anquetil’s invitation to languish is so convincing. Inseparable from her writing work, this intimate installation is an invitation to read her latest book, which is as much a work of art as her postures, her characters, her games of pretense. One must take the time to lie down on this sofa bed and see the outside life through a filter that is far too artificial to lose oneself in the writer’s thoughts and make them one’s own. My home, your home, our home.

Nicolas Pesquier’s research on motifs is a subtle blend of references to the history of art and the history of printed fabrics. The forms obtained echo a certain industrial past (overalls) and the automation of reproduction techniques (bricks); reinterpreted here by manual gestures made of prints, stamps and adhesives. In this theatrical salon setting, Nicolas Pesquier restores his recent experiments and leaves a doubt as to whether or not to activate his pieces.

The descent into the basements of Arondit – the “unconscious” part of the domestic space – offers a completely different narrative atmosphere made of strange colours, curious sounds and personified objects.
This is how one enters the interior of the dismantled body of a giant sausage, the last stage of Hilary Galbreaith’s filmic story Sausageland, whose epic is to be followed on the artist’s Instagram account. This final installation is the culmination of a long-term work on the confrontation of the human body with screens and augmented technological tools. This queen of the delicatessen allows us to glimpse her grotesque and parodic universe, with an assumed “low budget” aesthetic.

In response to this human-technology relationship, Brieg Huon questions the human-object dependency. The sculptures presented have a deliberately equivocal status, between furniture and autonomous machines, whose apprehension in terms of use shows our attachment to them. A robot furniture seems to be patiently awaiting its revenge. Further on, a kind of piece of furniture spreads a heady ritornello of silent films. The objects seem alive. 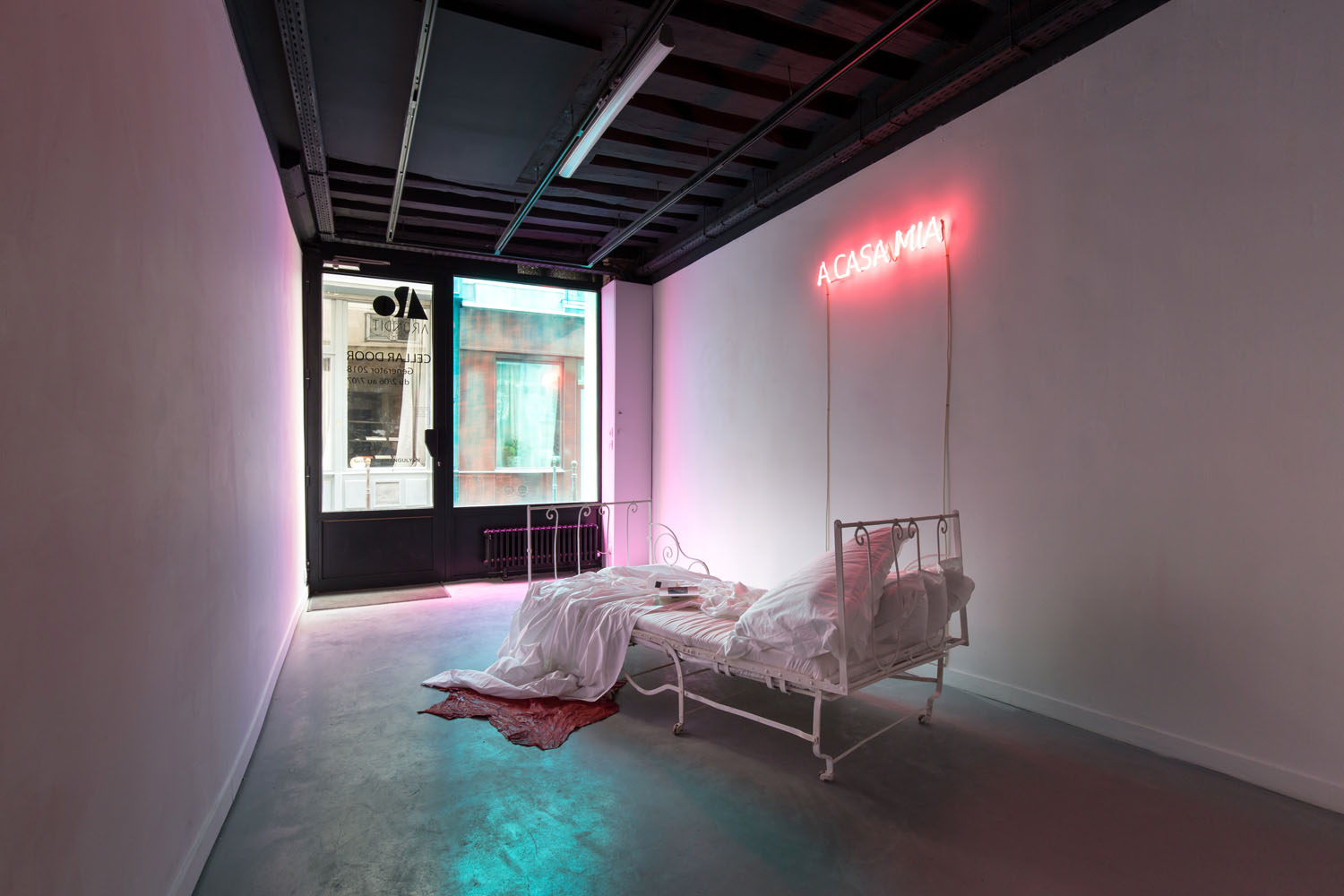 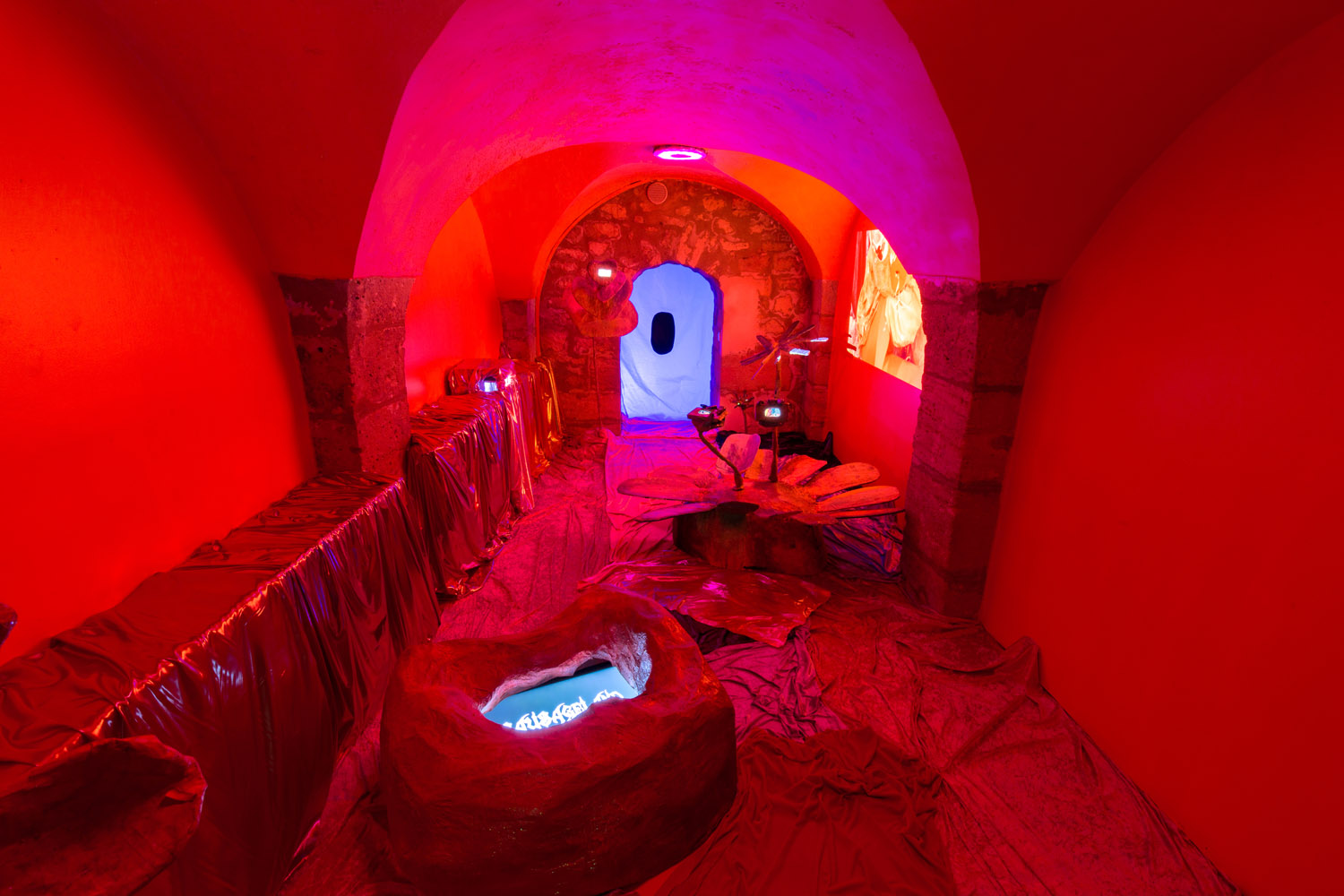 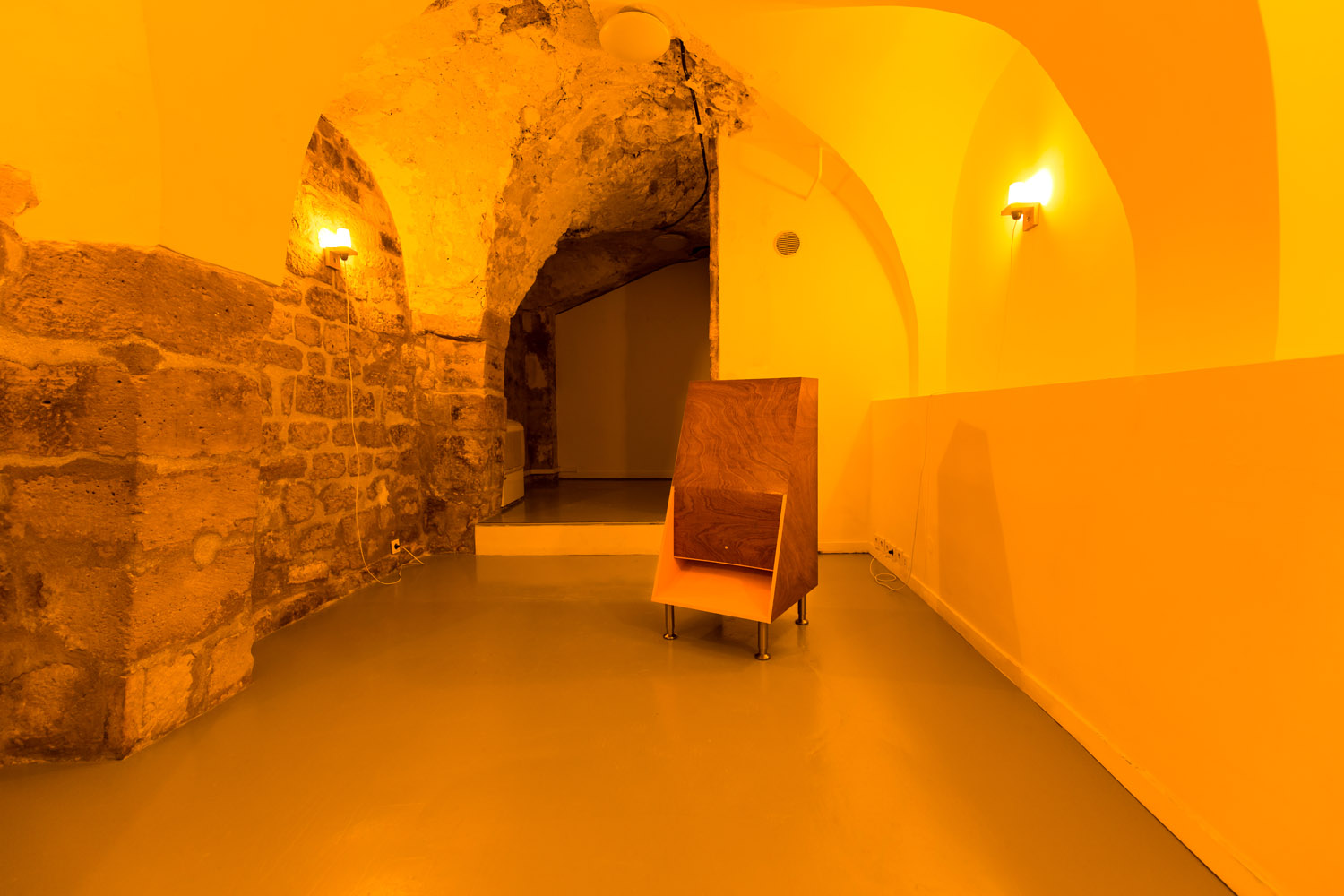 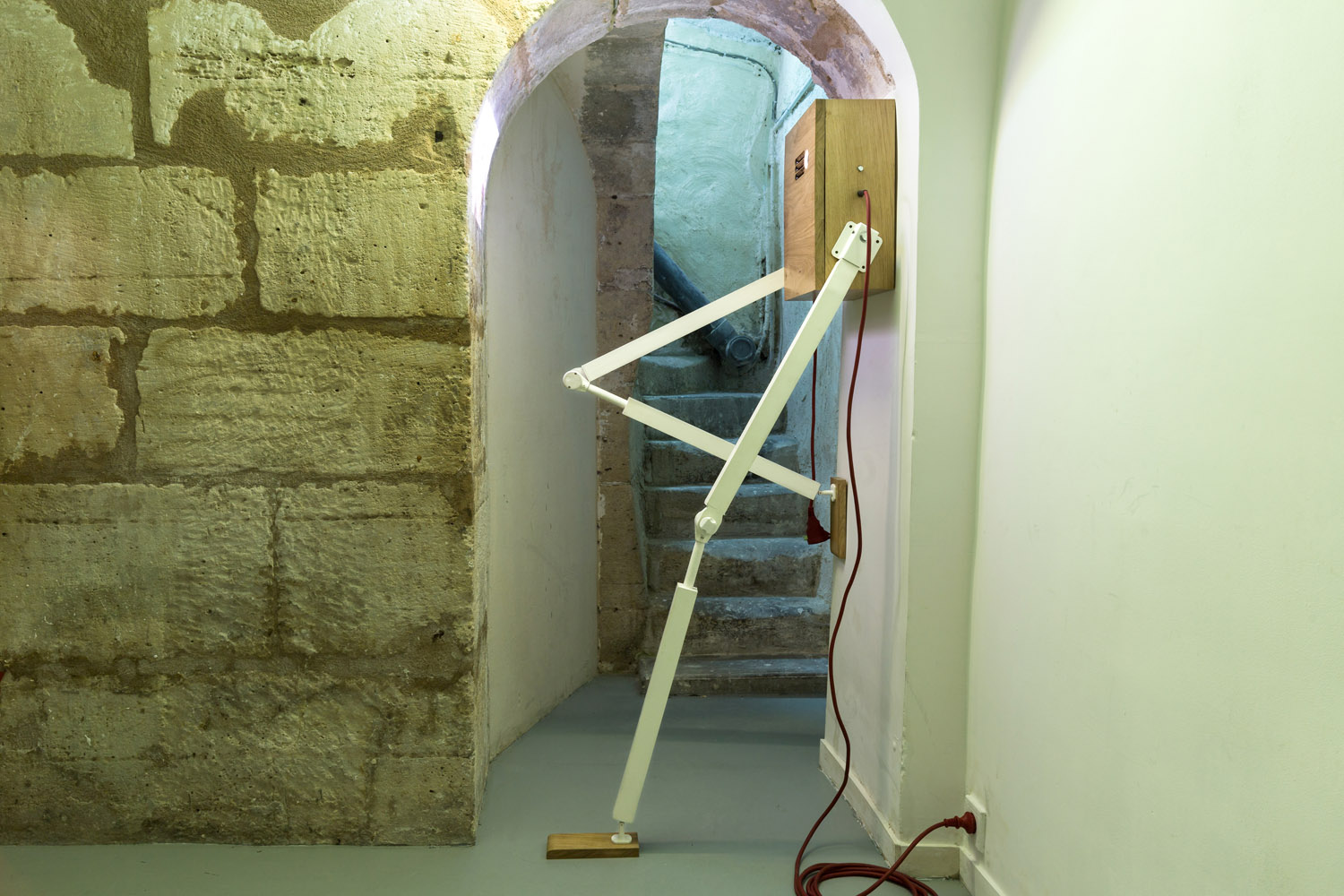 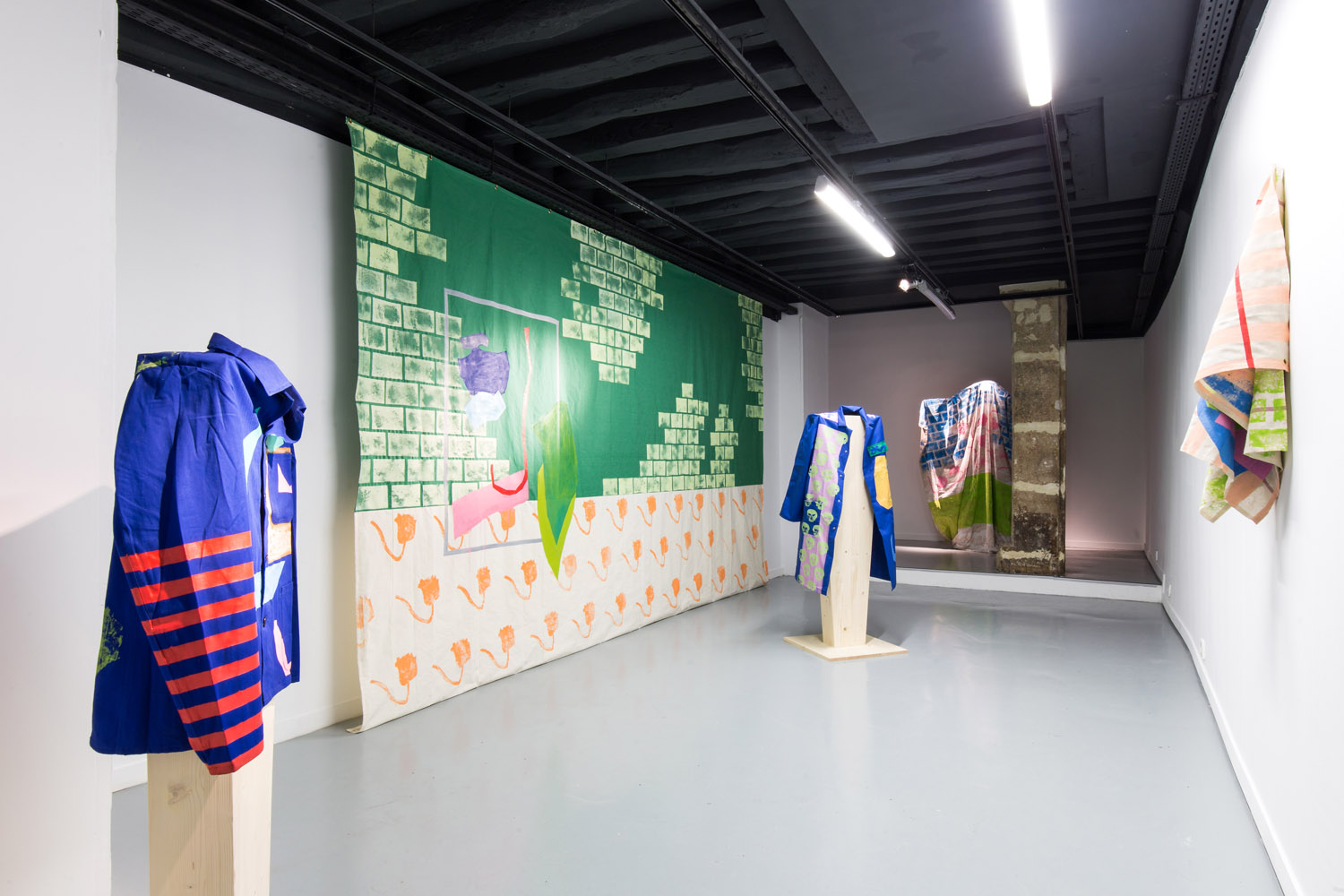 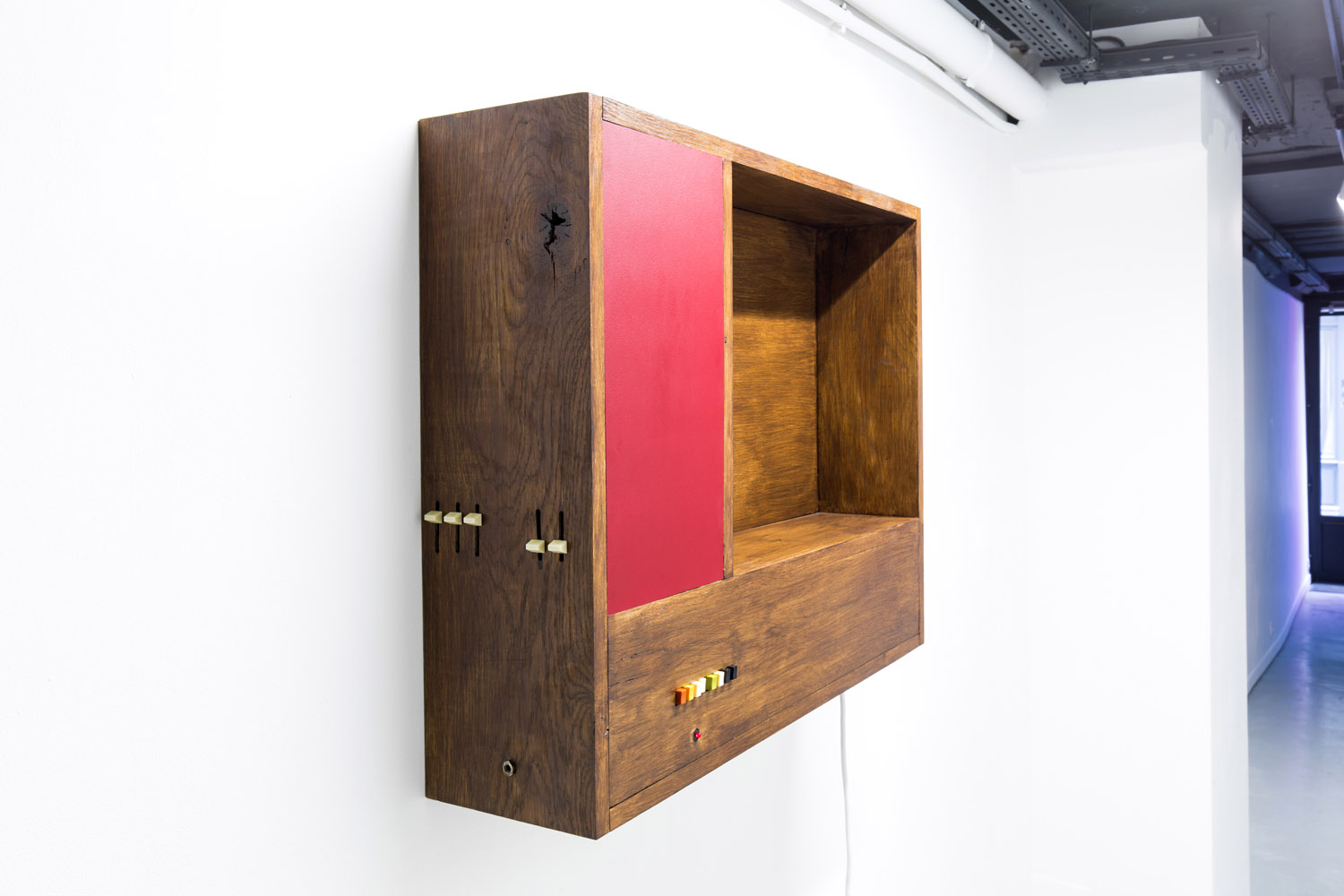